CAMP BONDSTEEL, Kosovo (4/7/11) - A new brigade of U.S. Army soldiers, led by the 111th Maneuver Enhancement Brigade of the New Mexico National Guard, officially took over responsibility for Multinational Battle Group East April 2. The 111th joined with units from nine other nations, in support of the NATO mission of maintaining a safe and secure environment and freedom of movement for all the people in Kosovo.

At the event, Army Col. Michael D. Schwartz, commander of the 111th MEB of the New Mexico Army National Guard, and the Soldiers under his command, officially accepted responsibility of MNBG E from Army Col. Francisco J. Neuman, commander of the 92nd MEB, of the Puerto Rico National Guard, and the Soldiers in his battle group... 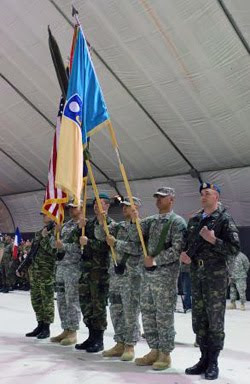 U.S. Army Soldiers from the 111th Maneuver Enhancement Brigade of the New Mexico National Guard, aided by troops from Ukraine, France and Greece, present the national and brigade colors during the transition of authority ceremony between KFOR-13 and KFOR-14 at Camp Bondsteel, Kosovo, April 2, 2011. The 92nd MEB had been providing safey and security in Kosovo since they took over the mission in July. (U.S. Army photo by Spc. Evan Lane) (Released)

Read the rest of this story here.
Posted by The Brat at 1:26 AM