RIFLES receive freedom of the city of Gloucester

Hundreds of people, young and old, cheering and waving flags, turned out to support soldiers from The Rifles as they marched through Gloucester after being granted the freedom of the city last week. 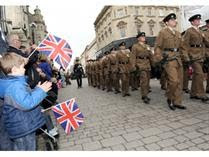 Soldiers from The Rifles parade through the city of Gloucester
[Picture: Sergeant Adrian Harlen, Crown Copyright/MOD 2011]

Nearly 200 soldiers representing the seven battalions of the regiment took part, accompanied by the Salamanca Band of The Rifles, Old Comrades from the 'Glorious Glosters', the Korean Veterans Association and the Royal Gloucestershire, Berkshire and Wiltshire Regiment, and members of the Gloucestershire Army Cadet Force.

About 600 soldiers from 4 RIFLES were deployed to Afghanistan during 2009 and 2010. The battalion tragically lost seven soldiers during those two tours, but featured highly in the operational honours and awards lists.

The parade started at the Victoria Basin Dock where the freedom of the city was conferred upon The Rifles by the Mayor of Gloucester, Councillor Jan Lugg, accompanied by the Colonel Commandant of The Rifles, General Sir Nick Parker, who is currently Commander-in-Chief of the British Army's Land Forces....

Email ThisBlogThis!Share to TwitterShare to FacebookShare to Pinterest
Labels: RIFLES get freedom of the city Gloucester