Keith has long been associated with his public support of the U.S. military and has participated in many USO tours and performances for deployed troops.

Before performing for the crew in the ship's hangar bay, Keith and his band members had a chance to tour the ship, to meet the crew and see exactly what it is they do on board the "city-at-sea" called USS Enterprise.

"Spending time with our troops around the world is something I've always regarded as a privilege and honor," said Keith. "I won't forget for a second who's really doing the heavy lifting to keep this country safe. And that's why I'll keep going back and spending time with those good folks every chance I get."

Prior to the show, Sailors and Marines had the opportunity to eat dinner with Keith and his crew.

"I had a great time at the dinner," said Yeoman Seaman Joshua A. Wright. "It's not everyday you get to eat dinner with Toby Keith and his crew."

During the show Keith wore an Enterprise tee shirt to show the crowd how proud he is with the ship and her crew.

"I think the concert was great for the crew," said Master-at-Arms 1st Class (SW/AW) Darren Villano. "After what this ship has been through so far this deployment, this concert is exactly what the doctor ordered. This is such a morale booster for the crew."

Keith spent most of the time on stage singing his award-winning songs and spoke to the crowd in between them. He received extremely loud cheers when he began his hit song 'Courtesy of the Red, White and Blue,' which is a song about 9/11 and Operation Enduring Freedom, which the ship has supported during its current deployment.... (More here)

And of COURSE, I have to share this video: 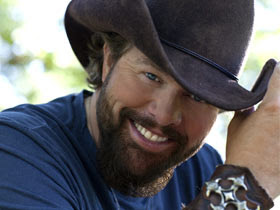 Toby Keith's ninth tour on behalf of the USO is currently underway in the Middle East. Keith and members of his band spent Easter Sunday (April 24) with the crews of both the USS Enterprise CVN-65 aircraft carrier and the USS Leyte Gulf CG-55 guided missile launcher, both stationed at sea. As part of the 12-day tour, Keith also performed for U.S. troops and their families stationed in Bahrain on Friday (April 22) and had his picture taken in an F-18 fighter jet decorated with his name and his "Big Dog" nickname on Saturday (April 23). So far on this trip, he has performed for more than 9,900 service members. "Since my first tour, I've been hooked on performing for troops. I start looking forward to my next USO trip the minute I touch down here in the States. I love it and I love our troops, they are the best in the world," Keith said. (From CMT here)
Posted by The Brat at 4:04 PM