CAMP DWYER, Afghanistan — Marines can’t change the weather. Fortunately, there are a few in Afghanistan who can forecast it.

“The weather can change in an instant out here,” said Maj. Robert B. Finneran, a senior watch officer with 2nd Marine Aircraft Wing (Forward). “METOC gives us as early a means as possible to make sure our missions are carried out safely.” 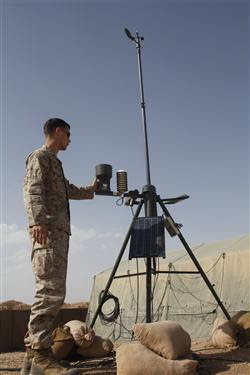 Their occupation field, commonly referred to as METOC, holds the responsibility for collecting and assessing weather-related information. As both Marines currently serve in Camp Dwyer, Afghanistan, the data they collect is used to help coalition forces in planning and carrying out operations against insurgent forces.

“We observe the weather hourly and set warnings and advisories for all the units on Camp Dwyer,” said Salter, a native of Pensacola, Fla. “We also forecast for any severe weather conditions such as thunderstorms and sandstorms.”

“There’s not a lot on The Weather Channel for the Helmand province area,” said Finneran. “The METOC Marines are my sole source of weather information.”...

Really a nice blog.... The information about Bob Chapman - A Marines Disquisition you entered is great...thanks for the useful information...