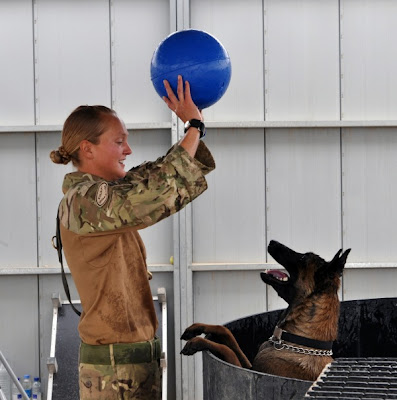 Kelly and Kevin 2 – Settling in

Hello again!! It’s now been a good couple of weeks since we last blogged and a fair bit has happened so let me bring you up to speed… Firstly on the 5th of April Kevin and I went for our licence, this involves a few test scenarios given by a RESA (Royal Engineer Search Advisor) and my own Sgt Maj which we have to pass as a team before we are allowed “out on the ground”. At this point Kevin had been working like a dream for a good few days now so I was sure that he was due a “Kevin” day at any time!! However we passed the morning search with flying colours and broke for lunch at midday before our afternoon scenario. At 1300 Kevin and I were first up for the final scenario, as i walked towards the RESA, Sgt Maj and my own Sgt I noticed that Kevin was acting like “Kevin” and pulling towards them in an eager fashion. As I reached them the RESA came over to brief me on the following search, while being briefed I realised Kevin was no longer pulling, instead he was indicating on the RESA’s bag telling me that he had a bomb in it!! I tried to ignore him and set up for the task in hand (in the opposite direction to the RESA’s bag) but despite my best efforts I couldn’t unfocus Kevin from the bag to which end I asked the RESA if I could let Kevin have a good sniff of his bag to satisfy his curiosity otherwise he would be unfocused on the task.

The RESA had no problems with this at all so i turned Kevin around and allowed him to investigate the bag… I should have known better!! Kevin sunk his teeth into the his bag and started to shake it from side to side as if it was his chew toy until I managed to wrestle it from him! Luckily the RESA saw the funny side of it, as do most when it comes to Kevin and luckily Kevin went onto do a flawless search resulting in us passing our licencing and we are now ready to crack on with our tour! Later that week Nick (the editor of this site) came to the dog section in Bastion to meet Kevin and take some photos of him before we deploy on the ground. Surprisingly Kevin was on his best behaviour which hopefully meant Nick got some good shots and I’m sure they will end up on here along with the blog. On the 12th of April Kevin and I went to Bastion flight line to get a helicopter out to our new location for the next couple of months. Pte Pryce was also on the same helicopter with his MWD (military working dog) “titch” as he was going to be based just 1km from me in another FOB. Kevin doesn’t mind helicopters, in fact I’d say he quite likes them, it’s the waiting around he doesn’t like and this brings out his mischievous side!! As the helicopter landed myself and Kevin along with about 12 other soldiers got our “kit” together to get on, however just at this point in time Kevin decided he wanted to play tug of war with my Bergan whilst I tried to get it on my back. This isn’t the easiest of games since I was wearing body amour weighing in at about 15kg, my rifle and the Burgan alone weighing about 40kg!! Unable to fight him off due to all the weight and bulk I walked (struggled) onto the helicopter with Kevin trying to pull us both back off! A short while later we landed in our FOB and as we got off, Cpl King and his MWD Casper got on to return to Bastion. We were met by Pte Gell and his MWD Scooby who then shown me and Kevin our bed space and gave us a quick tour of the FOB....


Go read the rest of this update on WOTN here.