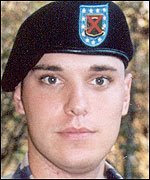 Today is Mike Stokely's birthday, and there are not many days that I do not think about Mike. Sgt Mike Stokely gave his all on August 16, 2005, in Iraq, in service to America.

They shall grow not old, as we that are left grow old:
Age shall not weary them, nor the years condemn.
At the going down of the sun and in the morning
We will remember them.

His younger sister, Abbey, made a video honouring her beloved brother:


Mike is an American Hero.

Mike's dad, Robert, has also written about his son:

Yes, today IS Mike's birthday, and I honour him.

Remembered and honoured. Always.
Posted by The Brat at 3:33 AM

Thank you for Remembering Mike on his 29th birthday. I was 29 when he was born. Went by way too fast... where did time go?
robert stokely
proud dad Sgt Mike Stokely
KIA 16 Aug 05 Yusufiyah Iraq
USA E 108 CAV 48th BCT GAARNG

Remember with Honor. Make it Matter.

I remember Mike and his Gold Star Dad Robert. We should never forget!

I will remember Mike, words are totally inadequate, but please know that HE will never be forgotten. Thank you for sharing Mike with us.
Ken Fairben, proud Dad of Keith G. Fairben, Para Medic World Trade Center 9/11/01

Thank you for remembering him. Thoughts and prayers for his family, today and always.

Happy Birthday Mike.
You will forever be remembered. Your sacrifice was not taken for granted.
Gone but NEVER forgotten. You're a true Hero.
Donna
Proud Army Mom