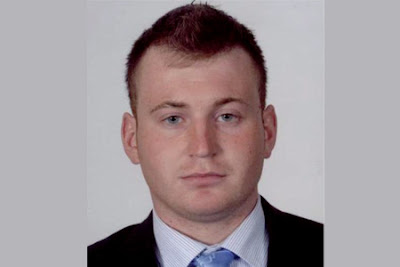 A young police officer has been killed by a booby-trap car bomb in Northern Ireland.

The device exploded under the vehicle outside his home in Highfield Close, off the Gortin Road in Omagh, Co Tyrone, just before 4pm today.

It is understood the 25-year-old was a new recruit to the Police Service of Northern Ireland and was a Catholic.

The scene in the Highfield Close area of Omagh after a newly recruited PSNI officer was killed in an under-car bomb attack. April 2011

"These crimes are targeted on those who protect the community.

"We all deeply mourn the brave young man whose life was taken by this savage crime.

"We all have a duty to stop those behind it from succeeding."

The blast will send shivers through the people of Omagh, where 29 people, including a woman pregnant with twins, were killed when a Real IRA car bomb exploded in 1998.

Irish Taoiseach Enda Kenny described the bomb attack as a heinous and pointless act of terror.

"Those who carried it out want to drag us back to the misery and pain of the past," he said.

"They are acting in defiance of the Irish people.

"They must know that they can never succeed in defeating the democratic will of the people."


Nuala Kerr, Ronan's mother, made an appeal in front of the cameras the next day:

“We don’t want to go back into the dark days again of fear and terror. We were so proud of Ronan and all that he stood for. Don’t let his death be in vain.”

To read more about this special young man, Ronan, and this amazing family, go read this article.