Lieutenant Tul Bahadur Pun, who died on April 20 aged 88, won the Victoria Cross while serving with the Second Chindit Expedition in Burma in 1944. 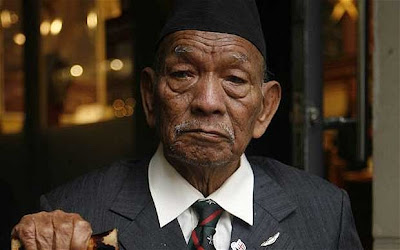 Early in March that year the Second Chindit Expedition, a force of six brigades comprising some 9,000 men together with stores, was air-landed in Burma. The main objectives of the Expedition were twofold: first, to support the advance on Myitkyina by the American-led Chinese troops and to establish a strong position astride the Japanese lines of communication; and secondly, to impede the build-up of Japanese forces for an invasion of India by harassing them in the Mogaung area.

The Chindits were supplied by establishing a number of fortified bases with airstrips south of Myitkyina. These strongholds provoked a strong reaction from the Japanese, and some of them subsequently proved indefensible and had to be abandoned.

On May 27 the 77th Indian Brigade was ordered to capture the Japanese supply centre of Mogaung. After almost a month of savage fighting which had greatly depleted the brigade’s numbers, the 3rd Battalion 6th Gurkha Rifles was ordered to attack the railway bridge at Mogaung on June 23. As soon as the attack had been launched, the Japanese opened concentrated and sustained crossfire at close range from a position known as “The Red House” and from a strong bunker position 200 yards to the left of it.

Captain Allmand, in command of “B” company, went forward alone and charged a machine-gun nest, but he was mortally wounded. So intense was the fire that both the leading platoons of “B” Company, one of which was Rifleman Pun’s, were pinned to the ground. Pun’s section — apart from himself, the section commander and one rifleman — was wiped out.

The section commander led his two remaining riflemen in a charge on The Red House, but he was at once severely wounded. Pun and his comrade continued the charge — but the latter, too, fell badly wounded. Pun then seized the Bren gun and, firing from the hip as he ran, continued the charge on the heavily bunkered position. He charged alone in the face of a shattering concentration of automatic fire directed straight at him.

With the dawn coming up behind him, Pun made a perfect target for the Japanese. He had to cross 30 yards of open ground, ankle deep in mud, through shell holes and over fallen trees. Against all the odds, he reached The Red House and closed with the occupants.

Pun killed three of the enemy, put five more to flight, and captured two machine guns and much ammunition. He then gave accurate supporting fire from the bunker to the remnants of his platoon, enabling them to reach their objective. Among the lives saved by Pun’s action was that of Major James Lumley, father of the actress Joanna Lumley, who has become one of the Gurkha Welfare Trust’s staunchest supporters....

Much more on this Hero here.


For more videos on the Ghurkas, go here.