The last personnel from the 2nd Battalion the Royal Regiment of Scotland to return from their six month deployment to Afghanistan arrived home today, Tuesday 26 April 2010. 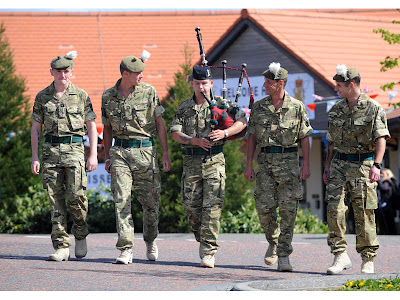 
During their six month deployment, the Battalion operated from Lashkar Gah City in Helmand Province,with their supporting elements, to provide security in the region and train the Afghan National Security Forces (ANSF) in preparation for them assuming full control of security in the country in the future.

During their time in theatre they improved the lives of the indigenous population by providing protection from the insurgents and implementing projects to raise the quality of life for the people.

Most lived with the 2 SCOTS soldiers, sharing patrol bases with them and conducting operations with them. This benefited everyone as the Afghans were able to talk to the local people and interact with them in a way the Jocks couldn’t, whilst the Afghans benefited from the superior firepower of the Jocks as well as the training that they received from them.

In the city of Lashkar Gah itself the ANSF were able to conduct security operations without the help of the forces from 2 SCOTS.

You KNOW there is more here.