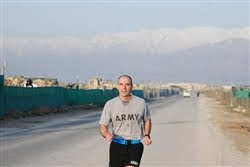 For some avid runners, a half-marathon a week might not seem like much. But Cuyler runs his weekly 13.1 miles while deployed to Afghanistan -- not an easy task, given the operations tempo, altitude and rugged terrain. But for Cuyler, the miles are just a small part of a larger, personal quest.

“My plan is to raise awareness of the United Ostomy Association of America veterans outreach program,” he said.

The UOAA is a national network for bowel and urinary diversion support groups in the United States. The veterans outreach program seeks to help military veterans, young and old, live with their ostomies.

“Unfortunately, many people limit their activities because of the fear of the unknown when dealing with their ostomy,” Cuyler said, “and others just need to know that they are not alone with this condition.”

The Hannibal, N.Y., knows all about living with an ostomy. In July 2007, following a seven-year battle with ulcerative colitis, doctors removed his entire colon. The surgery left him with a stoma -- an opening through his abdomen with an appliance bag attached. It also marked the start of Cuyler’s quest for understanding.

“My first thought following the surgery was just shock,” he said. “I remember looking down and seeing I was cut open, and this appliance was attached to me. I just couldn’t believe this was happening to me.”

At the time, this type of surgery meant a discharge from the military.

“I came back to work with the mindset that I was getting out -- that it was over for me,” Cuyler said. “Then, my nurse gave me this book, ‘Great Comebacks’ by Rolf Benirschke, a professional football player who continued his NFL career after his ostomy surgery.”

Benirschke’s book details the inspirational achievements of people who’d had ostomy surgeries. Though the stories encouraged him during that initial recovery period, Cuyler said, he thought the end of the road was near.

“My first day back to work was 30 days after the surgery,” he said. “I could only do one pushup and one situp. That’s it.”

Yet, each day following that first physical training session, the warrant officer discovered he could do a little bit more. “After a couple of months, I was getting back to my old self,” he said.

The book began to plant a seed in his mind....

Go read much more about this every day hero here.

Email ThisBlogThis!Share to TwitterShare to FacebookShare to Pinterest
Labels: Every Day Hero C WO4 Bob Cuyler