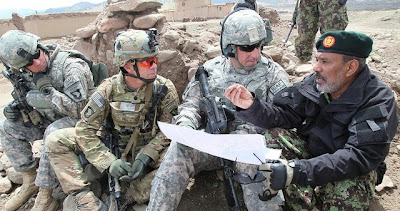 Their mission, the largest combined operations for TF White Currahee, was to clear and eliminate the insurgent staging area.

The preparation for Operation Overlord was months in the making.

“Traditionally, (insurgents) have used Naka as a staging area and bed down location, so they can conduct operations throughout our AO and AOs to the south,” said U.S. Army 1st Lt. Matthew D. Nunes, the platoon leader with 2nd Platoon, Co. E, 2-506th, 4th BCT, 101st Airborne Div. and native of Dennis, Mass. “Throughout the deployment we have been doing shaping (operations) to cut off their access to the rest of our AO and basically limit them to only being able to operate in Naka. This was our big push to take Naka away from them too.”

According to U.S. Army Spc. Rex W. Hann, an infantryman with 1st Platoon, Company E ‘Easy’, 2nd Battalion, 506th Infantry Regiment, 4th Brigade Combat Team, 101st Airborne Division and native of Lafayette, Ind., their mission was to disrupt any enemy that might be in the area and keep the local populace in Naka safe.

“It affects the overall security, because we have pretty much pushed the Taliban and foreign fighters to Naka, the farthest point from our (Combat Outpost), and we are trying to push them completely out of (our area of operations). Their last strong hold was in Naka,” he said.

Not only did the Soldiers face the challenge of clearing unfamiliar hostile territory, they accomplished it in weather conditions that included rain, hail, cold temperatures and gusty winds with enough equipment on their backs to last a minimum of three days.

“We carried around 110 pounds worth of gear in the rain, cold and wind while we moved around the mountains in the vicinity of Naka,” said Nunes.

During missions to remote villages the Soldiers face other challenges outside of the enemy threat.

“There are a lot of challenges, but one of the biggest is the communication barrier,” said Hann. “It is hard to speak to the locals not knowing the language—a lot of times they won’t trust the Americans because the Taliban has influenced them or told them false things about (us).”

To counter the issue, the Soldiers of Easy Company encouraged their Afghan National Police counterparts to take the lead when dealing with their countrymen.

“We worked with the ANP on this mission,” said U.S. Army Spc. Sean P. Bedard, a counter-insurgency team leader with E Co., 2-506th Inf. Reg., and native of Castor Valley, Calif. “It really helps to have them with us because it puts a local face on what we are trying to do, and the villagers trust these guys more because they speak the same language.”...

Go read the rest of this one here.
Posted by The Brat at 2:06 AM

Email ThisBlogThis!Share to TwitterShare to FacebookShare to Pinterest
Labels: Operation Overlord in Paktika