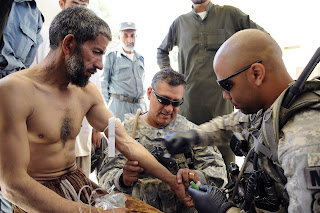 
KUNAR PROVINCE, Afghanistan (4/28/11) - During a mission in the Sarkani District April 25, the senior combat medic for the Iowa National Guard’s 734th Agribusiness Development Team provided urgent medical care to an Afghan road worker whose eyes had been accidentally doused with diesel fuel.

Co-workers of the injured man, Roz Amin, carried him to the Sarkani District Center shortly after the accident, which occurred on a road paving project just a few meters away. Members of the ADT were at the district center conducting a key leader engagement with the district sub-governor and other officials.

Amin’s co-workers brought him to a member of the ADT’s security forces and explained Amin had fallen into hot tar.

“When we’re out on mission, our job is to treat our soldiers first, but if an Afghan has an emergency involving life, limb or eyesight, we have a duty to treat them, too,” said Martinez.

“So when I first heard it was a burn, I was prepared for the worst, because I’ve seen a lot of burns at home and here in Afghanistan and it can be pretty bad.”

However, when Martinez assessed Amin, he discovered he had only minor burns on his hands and face....