Crowds of thousands in Shrewsbury yesterday gave a warm welcome to soldiers from 1st Battalion The Royal Irish Regiment, recently returned from a six-month tour in Afghanistan. 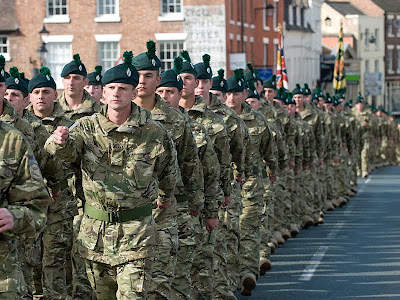 Around 400 soldiers and officers from the Shropshire-based battalion marched through the town to mark their return from a gruelling tour in Afghanistan which saw the loss of three soldiers. Ranger Aaron McCormick and Lance Corporal Stephen McKee were killed in action, and Ranger David Dalzell died in an operational accident.

The route, between Shrewsbury Castle and Shirehall, was lined with well-wishers who turned out to show their appreciation for the efforts of the battalion on the front line.

During the event, a thanksgiving and memorial service was held at Shrewsbury Abbey. The Secretary of State for Northern Ireland, Owen Paterson, was among the guests.

"We have always been made to feel welcome by the people of Shropshire. After six months in Afghanistan, the parade is a fitting finale to what has been a gruelling operational deployment.

"The turnout was incredible and it is extremely touching to see so many people showing their support."...