BHO on the troop drawdown - transcript 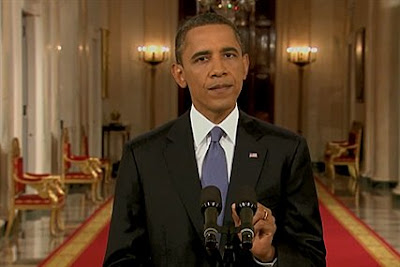 Remarks of President Barack Obama – As Prepared for Delivery

On the Way Forward in Afghanistan

Good evening. Nearly ten years ago, America suffered the worst attack on our shores since Pearl Harbor. This mass murder was planned by Osama bin Laden and his al Qaeda network in Afghanistan, and signaled a new threat to our security – one in which the targets were no longer soldiers on a battlefield, but innocent men, women and children going about their daily lives.

In the days that followed, our nation was united as we struck at al Qaeda and routed the Taliban in Afghanistan. Then, our focus shifted. A second war was launched in Iraq, and we spent enormous blood and treasure to support a new government there. By the time I took office, the war in Afghanistan had entered its seventh year. But al Qaeda’s leaders had escaped into Pakistan and were plotting new attacks, while the Taliban had regrouped and gone on the offensive. Without a new strategy and decisive action, our military commanders warned that we could face a resurgent al Qaeda, and a Taliban taking over large parts of Afghanistan.

For this reason, in one of the most difficult decisions that I’ve made as President, I ordered an additional 30,000 American troops into Afghanistan. When I announced this surge at West Point, we set clear objectives: to refocus on al Qaeda; reverse the Taliban’s momentum; and train Afghan Security Forces to defend their own country. I also made it clear that our commitment would not be open-ended, and that we would begin to drawdown our forces this July.

Tonight, I can tell you that we are fulfilling that commitment. Thanks to our men and women in uniform, our civilian personnel, and our many coalition partners, we are meeting our goals. As a result, starting next month, we will be able to remove 10,000 of our troops from Afghanistan by the end of this year, and we will bring home a total of 33,000 troops by next summer, fully recovering the surge I announced at West Point. ...

Email ThisBlogThis!Share to TwitterShare to FacebookShare to Pinterest
Labels: BHO on the troop drawdown transcript