As my regular readers know, every week I share one of America's (and sometimes, our coalition's) Every Day Heroes. These are people that most of America never gets to hear about, as they serve day in day out. It is always hard to choose just one example of the men and women who serve, so I have decided to also start another series: One of America's Best. No particular day for these, as I'll just share them as I find them: 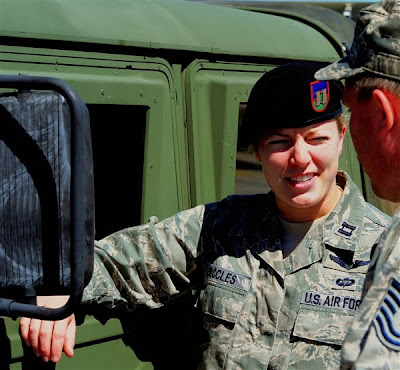 SHAW AIR FORCE BASE, S.C., June 27, 2011 – Like many aviators, Air Force Capt. Sarah Eccles, an F-16 Fighting Falcon pilot from San Antonio, caught the flying bug at a young age. On her 15th birthday, her father surprised her by taking her to a Wright Flyers Aviation flight school.

As she sat in the cockpit with the instructor, operating the controls and soaring through the air, Eccles said she realized she'd found her passion.

She began taking flying lessons soon after that test run. At age 17, on March 20, 1999, she experienced her first solo flight.

"It was a little intimidating going airborne, being in charge of this machine," Eccles recalled. "It's a huge responsibility, but such a confidence builder. I thought, if I could do this, what's next?"

After her high school graduation, Eccles attended the Air Force Academy and then two years of pilot training, where she fulfilled her dream and earned her wings as an F-16 pilot. After flying the F-16 for four years, she reached a time all Air Force pilots come to: their Air Education and Training Command lead-in fighter training, forward air controller and air liaison officer tour, also known as an "ALFA" tour.

This tour is a time when Air Force pilots take a break from flying to serve in other, career-broadening roles. Fighter pilots may become instructor pilots, operate remotely piloted aircraft or serve as air liaison officers, providing planning, coordination, and execution expertise to multiservice combat operations.

"The tour is designed to bring experienced flyers away from their main weapons system to other jobs to use their experience and to gain some experience," Eccles said. "The point is for pilots to broaden their careers."...


Go read more about One of America's Best here.