As my regular readers know, every week I share one of America's (and sometimes, our coalition's) Every Day Heroes. These are people that most of America never gets to hear about, as they serve day in day out. It is always hard to choose just one example of the men and women who serve, so I have decided to also start another series: One of America's Best. No particular day for these, as I'll just share them as I find them:

Shell Rock, Ia. – Five weeks ago, Spc. Joe Nichols decided he couldn’t speak at his brother Don’s funeral without falling apart. Today, he can declare in a steady voice that he hopes to transfer into the infantry, which could mean participating in the kind of combat patrols that proved fatal to Don.

Joe Nichols, 26, was serving with an Army Reserve road-clearing crew in southern Afghanistan in mid-April when someone handed him a phone and told him he needed to call home right away. 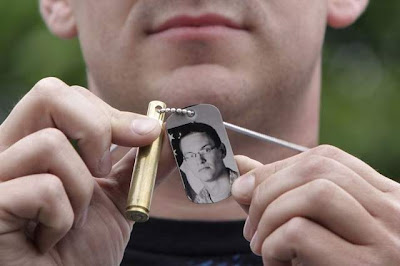 Joe Nichols was serving in Afghanistan when his brother Don was killed there. Joe and others in Shell Rock wear necklaces consisting of dog tags and shell casings salvaged from the last time Don was target-shooting with friends at home. / Mary Chind/The Register

He correctly feared that the call would bring dreadful news about Don, an Iowa National Guard specialist posted in eastern Afghanistan.

Don, 21, who had followed Joe into the military, was driving an armored truck on a gravel road when an insurgent’s bomb killed him April 13.

After returning to Iowa for the funeral, Joe considered rejoining his unit and getting right back into the war. “I was mad, and I wanted to get some bad guys,” he said. “But after a little while, I saw the bigger picture. I needed to stay here in Iowa and take care of my family.” Army officials told him it was his choice....

Go here - now - and remind yourself of those who daily ARE One of America's Best.

Email ThisBlogThis!Share to TwitterShare to FacebookShare to Pinterest
Labels: One of America's Best, Spc. Joe Nichols