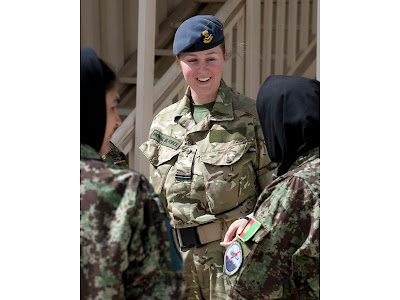 The 'Thunder Lab' flight school is part of the NATO Air Training Command (Afghanistan) and the training given there is designed to help ease the transition for Afghan Air Force officers who will soon travel from Kabul to the United States for pilot training.

The programme includes English language, along with aviation and professional skills, training to set up future pilots for success.

Flying Officer Atkinson, aged 22, is the UK's first female mentor at the school and is training a team of Afghan women along with their male counterparts. Her role is to teach a variety of aviation-related skills, including instructing students to fly 'virtual circuits' of RAF Brize Norton in Oxfordshire from computers.

Flying Officer Atkinson has recently finished her advanced multi-engine rotary wing (helicopter) course at RAF Shawbury and is to convert to front line helicopters later this year. When she was selected for the Afghan training role she said:

"I wasn't really sure what to expect on my arrival here - but I'm very impressed by the Thunder Lab. The girls know this is a challenge and there are several cultural barriers to overcome, so it is tough for them, but I was pleased to see how enthusiastic the Afghan female officers are - and that they really want to be here, to work hard and succeed...

Thank YOU for your service, Flying Officer Atkinson.