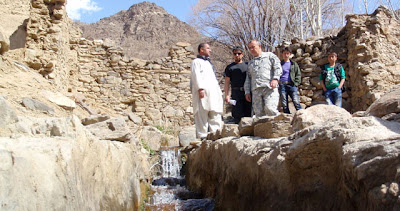 U.S. Army 1st Lt. Hakan Togul, Panjshir Provincial Reconstruction Team civil affairs lead and Crete, Ill., native, speaks with a village elder about a project to bring drinking water to Astana Village in Bazarak Municipality, Afghanistan March 24. Previously, the village had only irrigation water from the river in the valley at their disposal. The PRT provided materials while the villagers provided the funds for the labor. (Photo by U.S. Air Force Senior Airman Darin Pugh)

According to the PRT, Astana villagers had only irrigation water from the river in the valley at their disposal.

“They previously had no other way to obtain clean water for drinking and cooking,” said U.S. Army 1st Lt. Hakan Togul, PRT civil affairs lead and Crete, Ill., native. “The water from the river is unsanitary and was making some of the villagers sick.”

After villagers spoke to the local Community Development Council about the issue, the CDC brought the idea to the PRT civil affairs team.

“We were concerned more villagers would become sick from the conditions of the water,” said Idi Mohammad, a CDC member, through an interpreter. “We asked for help from the PRT so this village could have the clean water they needed.”

The PRT bought the materials required to build a piping system from a natural mountain spring more than 2,000 meters above the village. The villagers collected funds amongst themselves to help pay for the labor of the workers laying the pipe....