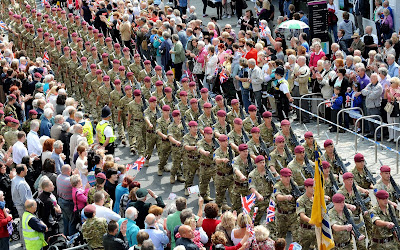 Image of the Day: Soldiers from 2nd Battalion The Parachute Regiment march through a crowded Colchester. More than 10,000 people lined the streets of Colchester to welcome the town's soldiers home after a six month tour of Afghanistan. (Copyright MoD)

More than 10,000 people lined the streets of Colchester yesterday to welcome the town's soldiers home after their recent six-month deployment to Afghanistan.

16 Air Assault Brigade, based at Colchester's Merville Barracks, exercised the Freedom of the Borough of Colchester yesterday, Tuesday 7 June 2011, to thank the town for its ongoing support.

The parade, led by the Band of The Parachute Regiment, took the soldiers along the packed High Street, with the salute taken at the Town Hall by the Mayor of Colchester, Councillor Helen Chuah; the Lord-Lieutenant of Essex, Lord Petre; and Brigadier James Chiswell, who commanded the Brigade in Afghanistan.

"The parade was a very emotional occasion which demonstrated the unbreakable bond between 16 Air Assault Brigade and the people of Colchester.

"Leading the parade made me feel proud of 16 Air Assault Brigade, proud of our achievements in Afghanistan, and proud to be part of this fantastic town.

"The support we receive from Colchester, both when we are on operations and in barracks, is incredible, and we cannot thank the local community enough. Colchester is part of the team and the town's support was key to the success of our recent tour of Afghanistan."...