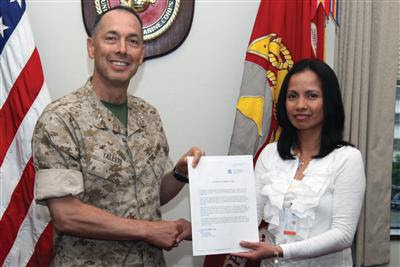 Almonte and her family are native to the Republic of the Philippines, where her husband was recruited in the Navy years ago. During their time in the military, both Almonte, her husband and their daughter became naturalized citizens of the United States.

Ironically, throughout the past three years, Almonte has served as the primary passport agent for official and tourist passports for MCBJ, led a team of Marines and organized seven naturalization ceremonies. She has provided this service to members of all U.S. military branches, their families and Department of Defense family members, contractors and civilians.

“We decided to leave because our daughter is about to be a senior in high school and she doesn’t know what it’s like to be a teenager in America,” said Almonte. “We want her to experience social interactions in America before going to college.”...