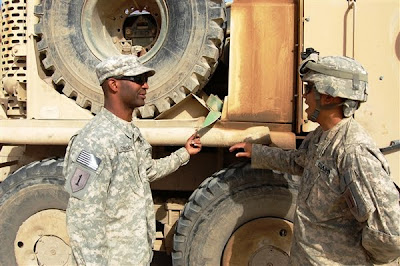 From serving in the Marine Corps, being a police officer in his hometown of Detroit, to deploying twice with the Vanguard Battalion to Iraq, Chatman has worked a variety of jobs that have not always been the safest. However, he is determined to continue his service to his country.

“I have always been employed in a job that had an ‘us versus them’ mentality,” he said. “I never had what civilians call a ‘normal’ job.”

Chatman joined the Marines in 1992 as a maintenance management specialist and served at El Toro, Calif., for three years. His first deployment came in 1994 during Operation Vigilant Warrior to Saudi Arabia. He left the Marine Corps in 1999 and returned to Detroit.

In 2000, Chatman joined the Detroit Police Department and, due to his military background, was assigned to one of the most unruly precincts in the city.

“They put me in the worst precinct on the midnight shift because I was a Marine,” he said. “My first form of combat happened in the city of Detroit, not while in the military. All I had was my pistol and my partner. I didn’t have air support, protection or a team to back me up like I do today in the Army.”

Chatman left the police department after three years because he missed being a Marine. He returned to the Corps in the same job he previously held....