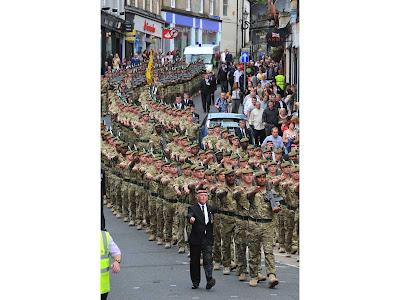 
The Argyll and Sutherland Highlanders, 5th Battalion The Royal Regiment of Scotland (5 SCOTS), are parading through various towns this week to mark their return home following a tough but successful deployment to Afghanistan.

In keeping with tradition dating back hundreds of years, the battalion paraded through the streets of Bridge of Allan on Saturday 18 June 2011, and Paisley yesterday, Monday 20 June.

Today they are parading through Dumbarton and will be in Alloa tomorrow.

The parades give the local populations the chance to show their appreciation for the hard work undertaken by the soldiers during their tour of duty and also allow the battalion to show its gratitude for the support that members of the public have given during the tour.

Traditionally, Argyllshire, Dunbartonshire and Renfrewshire in the west of Scotland, and the City and District of Stirling and Clackmannanshire in the Central Belt, have been recruiting grounds for 5 SCOTS....

Go read the rest of another of my favourite stories here.

Email ThisBlogThis!Share to TwitterShare to FacebookShare to Pinterest
Labels: 5 SCOTS parade through Scotland