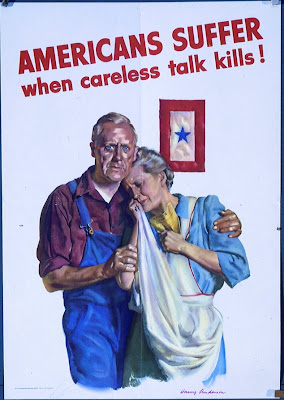 Today, an 'independent photographer/journalist/milblogger/writer/unembedded milkook' decided to share on FaceBook the email address of a serving member of the US Army. This is not the first time he has done this.

In a coincidence of timing, the British Ministry of Defence has issued a warning about the use/misuse of social media. The poster above is from World War II, when control of the media was much easier, but still campaigns about 'loose lips sink ships' were everywhere across England. In the current Global War on Terror, with troops (and wandering individual minstrels) in the sandbox having access to instant media, the issue of the safety of our troops is ever more prevalent as the various defence departments struggle to maintain the security of information that can aid the enemy, and endanger the lives of those whose mission is to secure the safety of Afghanistan civilians.

The MoD has launched another campaign aimed at protecting against all enemies - foreign and domestic:

Still image taken from the Ministry of Defence's Personal Security Online educational video campaign 'Think Before You...' aimed at increasing awareness among the Defence community of the risks associated with sharing too much information over internet social media channels
[Picture: Crown Copyright/MOD 2011]

With the campaign comes new MOD guidance for personnel using social media sites like Twitter, Facebook and YouTube, which warns users about the risks of releasing too much information about themselves or other operational details.

Called 'Think Before You...', the guidance will be incorporated into Phase 1 training, when applicants first join the Services, and into other mandated training materials for serving personnel.

The Chief of the Defence Staff's Strategic Communications Officer, said:

"Social media has enabled our personnel to stay in touch with their families and their friends no matter where they are in the world. We want our men and women to embrace the use of sites like Twitter, Facebook, LinkedIn and YouTube, but also want them to be aware of the risks that sharing too much information may pose. You don't always know who else is watching in cyberspace.

"The MOD Headquarters has its own Facebook, YouTube and Twitter feeds and we see no reason to stop our personnel from tweeting or posting on their own walls. But the MOD has a responsibility to warn personnel of the risks they could be exposing themselves to, hence the launch of this new campaign."..

The 'independent photographer/journalist/milblogger/writer/unembedded milkook' mentioned above would have his regular 'fans' believe that he is an experienced soldier/supporter of our troops, who has only their interests at heart. Today's publication of an email address puts the lie to that claim, of course. In a time of war, NO information that can put our troops' lives in peril should be published anywhere.

As I always ask: WHO does it serve?

We are at war, and there is NO 'need to know' for any of us to know any serving military member's email address, full name, or position within the military. Period.

The Office of War Information officials felt that the most urgent problem on the home front was the careless leaking of sensitive information that could be picked up by spies and saboteurs. Numerous messages to the public such as this one encouraged secrecy. In this "wanted" poster, a woman portrayed as the viewer's neighbor, sister, wife or daughter is an unwitting murderess. The effective use of photography on war posters ushered in a new era for commercial artists following the war. (source)

Email ThisBlogThis!Share to TwitterShare to FacebookShare to Pinterest
Labels: MoD and social media, MoD and Think Before You