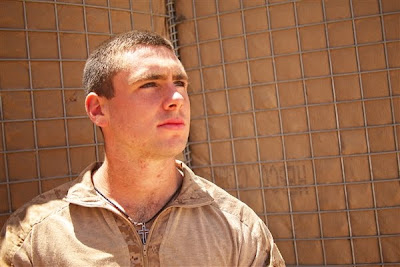 COMBAT OUTPOST SHUKVANI, Afghanistan, June 7, 2011 – Lance Cpl. Andrew J. Armstrong’s fellow Marines call him “Rock,” and the name fits him well. The Corinth, N.Y., native has survived two roadside bomb blasts. He is still in the fight and shows no signs of stopping.

But the memory of the first explosion will always be engraved in his mind.

The patrol members were aboard four mine-resistant, ambush-protected vehicles, and they were driving through the village of Corgulat in mid-afternoon. They then spotted something suspicious on the road: three rocks stacked on top of each other. It was a sign of a possible roadside bomb.

The patrol stopped, set up a perimeter around the area and called in an explosive ordnance disposal team to investigate.

The Marines and Georgian soldiers had learned to expect contact with insurgent forces during that time of day. Minutes later, the patrol started taking fire.

Marine Corps Sgt. Christopher Holm, the team leader for Fire Control Team 6, was on an observation post and saw the patrol taking fire from the east. He radioed the Marines and told them to take cover on the western side of the vehicles.

“I just turned the corner, and the next thing I knew, I was on the ground,” Armstrong said about being thrown from the explosive blast. “My initial thought was that I had been hit by [a rocket-propelled grenade]. I felt pain in my right arm. First thing I did was wiggle my fingers and toes to make sure they were still there.”...

Go read more on this Every Day Hero here.

God Bless you as you Bless us and ours. THANK YOU, Sir