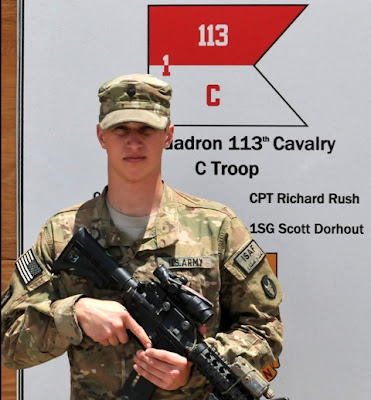 
BAGRAM, Afghanistan – There is something I need to tell you,” are not the words any mother wants to hear from her son who is deployed to Afghanistan.

“I am fine and healthy and not hurt, everything is ok but,” said Albers to his mother over the phone, “I have been shot in the helmet.”

“You were wearing the helmet right,” his mother responded, said Albers.

The phone call was made from Craig Joint Theater Hospital on Bagram Airfield, Afghanistan, May 28.

Albers and his team were conducting a dismounted joint presence patrol earlier that day in Parwan Province when the Afghan National Police officers they were teamed with spotted an individual they knew to be associated with insurgent forces. While searching a hillside for the individual, the team came under fire.

“My head cleared the hill … I saw a house on my right and as I was in the middle of saying ‘Hey I got a house over here,’ when I heard the first shot,” said Albers “It felt something hit me in the side of the helmet and was knocked to the ground. It felt like someone had hit me in the head with a wooden baseball bat.”

The team quickly took cover and responded with fire on the building. Albers was momentarily stunned, but after checking himself and realizing he was still alive, he regained his bearings and took up a position to return fire.

“I laid there for what seemed like five minutes but realized later that it was just a couple of seconds, I thought to myself, “Am I dying? No I don’t really think so,” Albers said. “Felt my head, no blood or anything, so I thought ‘okay what just happened to me?’ I was confused but I turned around and started laying down fire from the direction it had come from.” ...

Much more of this B*N*S*N story here.