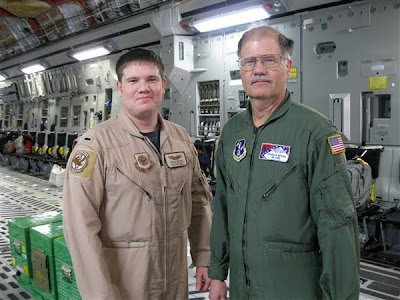 Air Force 1st Lt. Brian Myers, a C-17 Globemaster III pilot, and his father, Air Force Col. Charles Myers, state air surgeon for the Arkansas National Guard, pose for a photo after landing at Joint Base Andrews, Md., March 15, 2011. The father-and-son duo had the opportunity to work alongside one another as part of the Air National Guard’s critical care air transport team mission. Courtesy photo

ARLINGTON, Va., May 31, 2011 – Long duty days far away from home can be tough. A chance to speak with or see a loved one often can offer relief from the stresses of deployment. Ask almost any soldier, sailor, airman or Marine deployed overseas, and they will tell you that family and friends are always on their mind.

For one Air National Guard father-and-son duo, the Air Guard’s critical care air transport team mission offered them the opportunity to have this relief, if only for a moment.

“Having the opportunity to cross paths with my son was just an added bonus to the mission,” said Air Force Col. Charles Myers, state air surgeon for the Arkansas National Guard. “It was great to be participating in the same mission with someone who had grown up within my own Guard family.”

Myers’ son, Air Force 1st Lt. Brian Myers, a C-17 Globemaster III pilot with the Mississippi Air National Guard’s 183rd Airlift Squadron, flew some of the missions in which his father had the opportunity to participate. The colonel said he was very proud to be working with his son on such an amazing mission, even though the lieutenant spent time in-flight inside of the aircraft cockpit.

“My son was about 5 or 6 years old when I first became involved with the Air National Guard,” said Colonel Myers, “so he kind of grew up with [the Guard].”

Lieutenant Myers said growing up with his dad was the inspiration and the drive that motivated him to join the Guard later in life.

“I took my first flying lessons in high school,” he said, “and I definitely knew that I wanted to be in the military [and] knew about the Guard and the Guard family, so it really influenced me when I was in college to enlist.”...