Aqsa Parvez was a victim of the 'religion of peace.' Living in Canada, she was murdered by her father and brother:

Mississauga, Ont., teen strangled in 2007 after argument over hijab 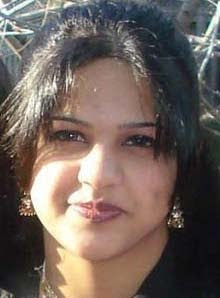 The father and brother of Aqsa Parvez, 16, have pleaded guilty to killing the Mississauga, Ont., teenager in 2007.

Initially it was believed by police that Muhammad Parvez had killed his daughter, but in court it was revealed that the brother had strangled Aqsa.

"[Muhammad Parvez] decreed she should be murdered, but Waqas Parvez is no less guilty. He had so many opportunities in those days to stop his father," said Crown prosecutor Mara Brasso inside the Mississauga court.

"The plan was in play at least two or three days before it happened. He never warned Aqsa. He never warned police. Even when they got to the home he obviously didn't falter on the threshold, on the doorstep and he carried on and murdered her," said Brasso.

I originally wrote about Aqsa on Tanker Bros when she was killed. At the time (and yes, still today,) I was outraged that muslims across the country were calling for calm, and saying none of us should jump to conclusions, or blame Islam. The muslims would have had us all believe that Aqsa's death was, rather, a case of domestic violence. To refresh your memories, I am going to copy my column from TB in full below:

How many times? Well, folks, as I have been saying all along, What is happening "over there" has EVERYTHING to do with us. Don't believe me? Take a look:

Think that is "over there"????? Think again. That young woman lived in Mississauga, (a suburb of Toronto), Canada. Lived there, that is, until Wednesday when her father - "a devout Muslim" - killed her.


I have been sick at heart since I first heard about this late Wednesday night. Regular readers here will know all the reasons why. What the **** is wrong with us, and what are we going to do about this? The same paper that carries the above piece has a "Special", where the writer - in a piece called "Torn Between Two Cultures" explores immigration.


How on earth, indeed? Canada prides itself on being a multicultural society. Just this last week, StatsCan released figures that show that in the not too distant future, Canada will be a nation of immigrants. Well yes, I know in North America we are ALL immigrants. I myself am the first generation of immigrants to this country. And yes, I have brought my own cultural preferences with me. Yes, I DO keep many of my birthlands cultural traditions in my daily life (Yorkshire puds anyone, or Devon Cream as I was talking to a friend about today - well, okay, drooling....?) but NO, not one of my native traditions would see me harming a hair on my child's body, let alone killing her.


Friends of Aqsa's said that the family was always fighting about her refusal to wear the traditional hijab, as well as Aqsa wanting to dress like a western woman.

On the National Post site, there are some interesting comments accompanying this story:


So even in a comments section in a Canadian newspaper, we have self professed Islamists disagreeing over the wrong or right teachings re the hijab. No wonder kids get confused. But, as I have been reading this story, I remember an incident I was involved in with an immigrant father in a Canadian elementary school. Lunchtime and the kids, 5 - 9 years old, are playing football (okay, to go with the culture.lol....soccer). Dads standing around watching the action as the kids are being kids. One dad, a newly arrived immigrant, screaming at his son in broken English. Yelling at him, egging him on to be more aggressive, more cutthroat in his efforts. I listen, and then move to stand next to him. As he keeps yelling, his son falters in his dribbling of the ball, and looks at his dad. The other kids look at the dad, look at me. I know the child quite well, but the dad doesn't know me to talk to, even though he has seen me around the school. I start talking to the dad, explaining in non confrontational tones that here in Canada, soccer is a game, with the only goal being fun, bonding with friends. Dad reacts; I am, after all, just a woman. But, as I talk, keeping a respectful distance from him, but close enough to look directly at him, I watch his face relax, and his body language change. I can only imagine what this father has seen in the most recent past with his family escaping from a war zone. My heart goes out to him, and I see him, feel him respond to me. He is like parents the world over. Wanting his child to have the best, BE the best that he can be. Every parent "gets" this.

It is reported that Aqsa's family came here in the 70's. Yes, admirable as it may be for Muhammad Parvez to adhere to his religious beliefs, I have to think that after this long in Canada, he understands what the social, cultural expectations are. Dad was a cab driver. I cannot imagine how he continued doing that job, given that he would have to carry passengers who seemingly lived in direct opposition to his own faith.

Be that as it may, according to reports I read today, Aqsa was the victim of abuse for quite some times. It is reported that she had actually been staying at friends' houses, and only returned home to pick up some of her clothes. In the comments previously quoted, Dr. Mehta says:

Okay then. Even IF we put aside all the 'oversimplification' of this case, and acknowledge that this 'is a complex issue of...immigrant to this country', I will NEVER believe that this is a 'typical' teenager/parent struggle for freedoms.

Fact is, this family came to this country knowing full well what the Canadian culture is. Aqsa, by her age, was born a Canadian. She IS one of ours. I am so not ready for a 'rational dialogue' on this one. I just can't. In one article in the Globe and Mail, one of Aqsa's friends describes an incident where they were out together, and saw Aqsa's brother walking down the street towards them. Aqsa panicked because she was not wearing her hijab. Quote: "“She said, ‘He'll kill me, he'll kill me.' I said, ‘He's not going to kill you,' but she said, ‘Yeah, he will.' And nobody believed it.” End quote (here).

So, as I have said before: what happens over there IS here. Today, now. What are we going to do about it? Some of the neighbouring families have said they had no idea that Aqsa was abused. One is quoted as saying: "they seemed like a nice, normal family." Same old story, and I am sick of it. Don't get me wrong. I have worked alongside muslim men and women, and have no issue with anyone having a religion. BUT, even if we decide to interpret the death of this precious young woman as a result of a typical rebellious teen, (which you all know I don't buy for one second!), still not acceptable to me. No. Others knew what was happening to Aqsa. Every article I have read today tells me this. It doesn't matter to me what religion you or your family is. In this country you are free to practise your religion as you see fit.

Having said that, if your religion leads you to abusing or killing another, especially your child? I expect, I demand that you face the full weight of the Canadian law. Canadian law, in this country that this family chose (a case of "be careful what you wish for"?), takes precedence over any laws you brought with you. Really it does.

Oh, and to give someone else a word in about the typical Islamist cleric's response to this tragedy? Check this out:


So, what on earth are we going to do? Really. We, Canada, cannot allow one more Aqsa to be a victim of this Islamic terrorism. We just cannot. What happens "over there" must not EVER be allowed to be acceptable behaviour here. No.

A memorial for Aqsa Parvez is set up at Applewood
Heights S.S. in Mississauga, in this undated handout photo.
REUTERS/Handout/ Peel District School Board. (source)

That original column was here.

CBC reports that those two murderers will get automatic life sentences. All well and good, but Aqsa got a death sentence. When, when are we going to decide that this bs of the 'religion of peace' has NO place in our countries? Every other day, it seems, we read of a young girl on our continent abused or killed by these murderous practitioners of Islam.

How many more Aqsa's must we lose, before we truly understand that "what happens over there" has EVERYTHING to do with us. It is here now, in our countries, and as long as we allow it, more precious girls and women will pay the horrific, ultimate price of this 'religion of peace.'

And still her grave is allowed no headstone.