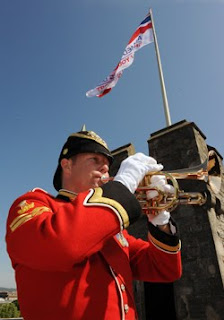 Armed Forces Day flags were today’s raised across the UK signifying the build up to Armed Forces Day on Saturday 26 June. 480 District, City Borough and Metropolitan Councils throughout the United Kingdom, the Channel Isles and the Isle of Man took part, and flags were also raised on government departments and No10. Photograph shows Sergeant Ian Richards Bugler from the Royal Welsh Band marking the official raising of the Armed Forces Day Flag at Cardiff Castle.

Every local authority in England, Scotland, Wales and Northern Ireland simultaneously raised the Armed Forces Day flag at 10.30am. They were joined by 480 District, City Borough and Metropolitan Councils throughout the UK, the Channel Islands and the Isle of Man, as well as Government departments, No 10 Downing Street, overseas territories and operational bases overseas.

Prime Minister David Cameron urged the public to get behind Armed Forces Day and fly the flag themselves. He said:

There is huge respect for the Armed Forces community out there, and I want that expressed more loudly and more proudly. As someone once said, silent gratitude isn't much use to anyone – so next Saturday I hope we see an explosion of red, white and blue all over the country.

Defence Secretary, Dr Liam Fox, also pledged his support for Armed Forces Day and asked people to get involved in events taking place across the UK. He said:

As a nation, we should be flying the flag for our Armed Forces and recognising all the sacrifices they make to keep our country safe. ..(more here)

I am grateful to our armed forces, every single day. Thank you ALL..
Posted by The Brat at 4:20 AM