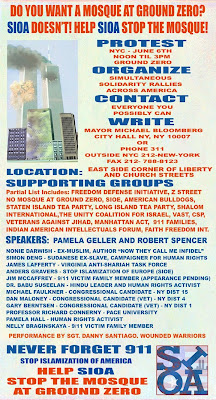 [...] the June 6 rally will show him [Bloomberg] that he is on the wrong side of the will of the people. Because the people of New York know that the Mayor is wrong. This mosque is not about freedom of religion. It’s about insulting America and the victims of 9/11 and establishing an international symbol for Islamic supremacism in New York. The mega-mosque will be the rallying cry for the universal caliphate — a shrine to jihad at the cherished site of Islamic conquest.

And Ground Zero mosque imam Feisal Abdul Rauf is an open proponent of Sharia, Islamic law, a system that denies free speech and the legal equality of all people.

Why the lies? And there’s more. Although he claims that the Ground Zero mosque will become a place for dialogue with Jews and Christians, Rauf has told the Arabic press: “I don’t believe in religious dialogue.” He has told the American media that money for the mosque will come entirely from Muslims here. Then he told the Arab media that funding for the mosque was coming from many Muslim countries. Daisy Khan has insulted the victims of the 9/11 jihad attacks and their families by saying that the mosque is intended to “make something positive out of 9/11.”

SIOA is rallying this Sunday, June 6 (and again on September 10), to call on the mosque organizers to withdraw their plans of the Ground Zero mosque in the interests of mutual understanding and mutual respect. The idea of a mosque at Ground Zero is hurting too many families and patriotic Americans. The jihad against the West is still being waged. Ground Zero is a war memorial, a burial ground. Respect it. (go here)

I most recently wrote on this travesty here. In that column I gave options for making your voice heard, if you cannot attend this rally specifically. For more background, and updates on the efforts to defeat creeping Islam in America, go to Stop Islamization of America here.

From the FDNY site TheBravest.com I found this gem, that I was not aware of:

Meanwhile, please write to Mayor Bloomberg to voice your objection. I would remind you that he is Chairman of the National September 11 Memorial Foundation and has donated some $15 million of his own money to the project. [emphasis mine]

The Cordoba House will completely undermine the effort to preserve the history of 9/11 for future generations.

As the flyer above asks: Do you want a mosque at ground zero?


WE all know there are at LEAST 3,000 reasons NO mosque ever should be built anywhere near such hallowed ground.


Make YOUR voices heard. PLEASE.
Posted by The Brat at 5:00 AM

Email ThisBlogThis!Share to TwitterShare to FacebookShare to Pinterest
Labels: Rally to stop the Mosque at Ground Zero