Soldiers from the First Battalion The Royal Regiment of Scotland (1 SCOTS), are partnering and mentoring the Afghan National Army (ANA) deep in the green zone near Nad 'Ali in Helmand province. 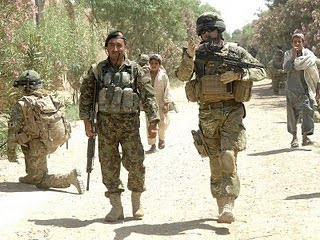 
1 SCOTS provide Advisory Teams to the Afghan National Security Forces and have been carrying out operations and training alongside their Afghan colleagues.

"We have now become advisory teams. In each of the Kandak or Tolay locations (types of ANA units) we have a two man team which is usually an officer and a sergeant. Their job is to advise and mentor the ANA in their everyday duties, operations and administration."

The advisory teams mirror the locations of the ISAF and ANA ground holding troops. In these locations, ANA troops are partnering with ISAF forces to allow them to learn necessary military skills:

"We mentor them on their patrols, we help them with the planning of those patrols, and we go through after action reviews with them. 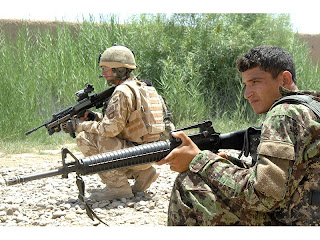 "We also look at their living conditions and see what we can do to improve these.

"It really goes across all the strands, from manning through to operations, through to planning, signals etc…we're trying to build the ANA into a modern army," said Major Suddaby. ...

Look for this story on the front page of your msm. Or maybe not, but you can find this B*N*S*N story over at Helmand Blog here.
Posted by The Brat at 3:09 AM