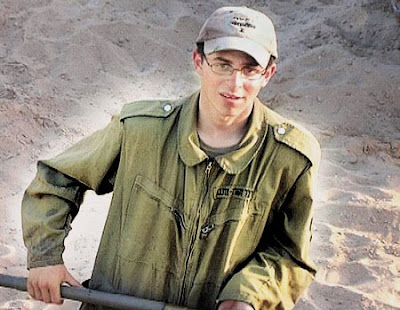 Today marks four years that Gilad Shalit has been in captivity. June 25, 2006, Gilad Shalit was captured in a cross border raid. In the ensuing four years, Gilad has been denied even the most basic of human rights, and his family has no idea where he is, or how he is, since even the Red Cross has not been allowed access to him. This is contrary to the Geneva Convention, and human decency.

This video was released last year:

"Hello, this is Gilad, son of Noam and Aviva Shalit, brother of Hadas and Yoel who live in Mitzpe Hila. My ID number is 97029....

"I wish to send my well-wishes to my family and tell them that I love them and miss them greatly, and hope for the day I'll see them again. Dad, Yoel, and Hadas, do you remember the day you arrived at my base in the Golan Heights, on December 31, 2005? We toured around the base and you took a picture of me on a Merkava tank and on one of the old tanks at the entrance to the base. Later we went to a restaurant in one of the Druze villages and on the way we took pictures on the side of the road, against the backdrop of the snowy Hermon Mountain."

"I want to tell you that I feel well in medical terms, and that the Mujahidin from the al-Qassam Brigades are treating me excellently. Thank you very much and goodbye," Gilad concludes.

In that four years, most of the world has moved on, but many of us remember. Today, there is a flotilla in New York:

Pro-Israel supporters are turning the anti-Israel flotilla fad into a positive effort to sail in a rally for the freedom of kidnapped soldier Gilad Shalit. This Thursday will mark four years since Hamas and allied terrorists kidnapped him at an Israeli checkpoint near Gaza.

The “True Freedom” flotilla of covered boats will sail, rain or shine, at noon Thursday from Manhattan’s Pier 40. At least four boats will sail, including two of them capable of accommodating 500 people each, according to the Conference of Presidents of Major American Jewish Organizations, which is sponsoring the event.

The organization told Israel National News that Conference director Malcolm Hoenlein came up with the idea of the flotilla, which has been a favorite gimmick the past year by pro-Hamas supporters trying to end Israel’s anti-terrorist maritime blockade of Hamas-controlled Gaza.

The boats will sail pass the Statue of Liberty and the United Nations before returning to Pier 40 around 2 p.m. EDT.

The flotilla’s is "to remind the international body and the world of the real siege in Gaza and call for the release of Gilad Shalit,” the Conference stated....

In the 1460 days that the world has no word on Gilad, the US has given millions of dollars to Hamas, with nary a word on conditions of Gilad's release attached to those dollars. Hamas continues to toy with the Israeli politicians, even as they offer 1,000 Hamas terrorists in exchange for Gilad.

Israeli Soldier's Mother speaks for all of us, when she says:

I am not a leader of a country, not even of my own home. I am not a politician who can sway crowds with a speech or rock countries with my demands. I am a mother whose heart cries today for another mother. I salute Aviva Shalit, her courage, her strength. I pray for her son every day and today, more than any other....

And she ends with this:

All I can give Gilad today is my prayers for him. Be safe, be healthy, may you know the world over today people are praying for you, sending their love and hope and most of all, may you come home soon....

She has more to say, and a video here.

Today - and every day - my prayer for Gilad still remains: May you come home soon.

My tagline on Soldiers' Angels says:

Today - and every day - I stand with Gilad and his mother Aviva.

Email ThisBlogThis!Share to TwitterShare to FacebookShare to Pinterest
Labels: Gilad Shalit 4 years on

My prayers for him also. I fear he will never be released by those terrorists.

Frankly, I am amazed that Gilad Shalit is still alive. I'm thankful though. What a nightmare for his family and for Gilad.

Many of us do still remember. My prayers for him and his loved ones.

What I would like to know is where are all those humanitarians demanding freedom for Gilad?

Where are the benefit concerts, the demand to the U.N to free Gilad?

And where were they when Israel was under intense rocket and mortar attacks.

Anybody? Hello.....Hmmm...Predictable, the humanitarians are nothing but a bunch of phonies.

It was the kidnapping of Gilad Shalit that started the blockade of Gaza.