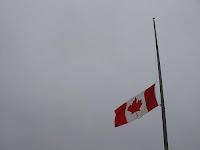 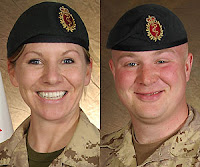 Two Canadian soldiers were killed in Afghanistan when their armoured vehicle hit an improvised explosive device, the military said Saturday.

Master Cpl. Kristal Giesebrecht and Pte. Andrew Miller, both medics from CFB Petawawa, had been responding to a report of a mine found in the doorway of a home when their vehicle detonated the IED, the military said. The blast occurred about 20 kilometres southwest of the city of Kandahar.

They were attached to the 1st Battalion, Royal Canadian Regiment Battle Group.

A third soldier was taken to a hospital on Kandahar Airfield and was in stable condition.

"Although we cannot say for certain that these medical personnel were targeted deliberately, it is for certain that the threat to Afghans stemming from the influence of out-of-area fighters at this time of year is very serious," said Brig.-Gen. Jonathan Vance, commander of Task Force Kandahar.

"Medical technicians are indispensable to the work being done by Canadian and Afghan soldiers. They participate in every Canadian Forces patrol and operation," Vance said.

In a statement Saturday evening, Prime Minister Stephen Harper offered his condolences to the families and friends of the two soldiers who "served bravely while helping to build a stable Afghanistan."

"Our Canadian Forces members in Afghanistan daily face life-threatening situations that are created by an enemy who is working to undermine the building of a democratic and self-sustaining society," Harper said.

“The courage and dedication demonstrated by Master Cpl. Kristal Giesebrecht and Pte. Andrew Miller speak volumes about their pride in Canada and in creating a better country for the Afghan people."

Soldiers based at CFB Petawawa

Vance said Giesebrecht was born in Wallaceburg, Ont., and was a member of 1 Canadian Field Hospital, based at CFB Petawawa in the Ottawa Valley.

He said she was married and a fit, dedicated and fun-loving medical technician serving her second tour in Afghanistan.

"She was a mentor and an inspiration for her fellow medical technicians. Kristal loved life to the fullest. She was a wonderful friend, always opening her heart to everyone in need," Vance said.

"Kristal prided herself on her health and fitness, although she always felt the solution to any problem could be found in a box of chocolates."

Miller was born in Sudbury, Ont. A member of 2 Field Ambulance, based at CFB Petawawa, he was serving on his first overseas deployment.

Vance said Miller will be remembered as someone who would give his fellow soldiers the shirt off his back and was always the first to volunteer.

"Andrew was very confident in both his soldier and clinical skills. He wanted nothing more than to be part of the Health Services Unit for ROTO 9, in Afghanistan, so that he could put his skills to the test," he said.

"Called Caillou by his friends, everyone acknowledged the resemblance [to the children's cartoon character] as soon as they met him."

KANDAHAR, Afghanistan — A group of Canadian medics said goodbye to members of their military family Sunday during a ceremony for Canada's two latest victims in the war against the Taliban.

Master Cpl. Kristal Giesebrecht, 34 and Pte. Andrew Miller, 21 were attached to a unit that was enroute to deal with a mine found in the doorway of a home Saturday when their vehicle detonated an improvised explosive device.

Giesebrecht and Miller were both medical technicians attached to the 1st Battalion, The Royal Canadian Regiment Battle Group.

The incident occurred at 11 a.m. local time about 20 kilometres southwest of Kandahar City.

There are only about 130 medical personnel within Task Force Kandahar and losing Giesebrecht and Miller is a blow.

"There's several people on this Roto (rotation) right now that I've been deployed with so we all know each other and it definitely is a big family. We count on each other for just about anything," said Lt. Navy Melissa Mertens after a private memorial for the two soldiers.

"I talked about it with my family before coming here and it's not what anybody wants when they come here but everybody thinks it's not going to be them. It's something that we are all aware of but it can happen," she added.

For medics - the risks that come with the job are quite simply a fact of life.

"I've been in the situation that they were in before. I know that they're out there to help. That's our goal out there," explained medic Pte. Jon Forsyth.

"We just want to help our soldiers so bad. We know the dangers when we go out and we accept the risk when we sign the contract."

Operational requirements by the military resulted in a scaled down nighttime ceremony for Giesebrecht and Miller, with only about 150 people allowed to attend.

While a piper played Amazing Grace their flag draped caskets were slowly carried aboard a military aircraft for their journey back to Canada.

Such services, known as ramp ceremonies, are never easy for soldiers serving in Afghanistan, however losing two individuals who provided medical aid in the field makes it even more difficult. But they realize the importance of the job.

"They were risking their lives for fellow Canadian soldiers, for fellow NATO soldiers, for the Afghan public. As medics we truly will help anybody. We have helped everybody and we'll continue to do that," said Master Cpl Sergio DeFranco.

The medics were focusing on their memories of Giesebrecht and Miller.

"Kristal was an absolute sweetheart. She would open her heart to absolutely everybody. She loved being a medic and she loved helping people," said Mertens. "I was blessed to be able to call her friend and I was really lucky to have met her and have as part of my life."

"Miller was a great soldier. He was always eager. He was the first one to always volunteer for any task that came down," said DeFranco.

"He truly, truly loved being a Canadian soldier. He wanted nothing more than to come to Afghanistan to serve his country." (More here)

Giesebrecht was a whirlwind of activity when spotted recently in a clinic, rushing around good-naturedly at double or triple time as she made her rounds.

The medic was, Vance said, "a mentor and an inspiration" to the other combat medics, who form a tight, highly respected and trained community within the military.

"Kristal prided herself on her health and her fitness, although she always felt the solution to any problem could be found in a box of chocolates," the general said.

Miller had made it known that he wanted to come to Afghanistan "so that he could put his skills to the test," Vance said. An accomplished cook, he went by the nickname Caillou because of his resemblance to the infinitely curious cartoon character of that name, the general said. (Read more here)

OTTAWA - The Honourable Peter MacKay, Minister of National Defence, issued the following statement today on the deaths of two Canadian soldiers in Afghanistan:

"We grieve the loss of Master Corporal Kristal Giesebrecht and Private Andrew Miller who died yesterday in Afghanistan. These soldiers were killed by an improvised explosive device while on patrol in Southern Kandahar. This is a tragic loss for Canada and for the Canadian Forces.

My heartfelt sympathies are with the families and loved ones of these brave soldiers, who should be proud of the selfless sacrifice made by Master Corporal Kristal Giesebrecht and Private Andrew Miller.

I join with Canadians, and the Government of Canada, in supporting our troops who are helping create a better future for the Afghan people. We will honour the sacrifice of these brave soldiers by continuing our efforts to build a safe and secure Afghanistan.” (source)

As soon as this news was released, it was all over FaceBook, and our allies also feel the loss greatly:

...Medics going to help folks.........doesn't seem fair. [Miller's] buddies late last night @ the ramp service said he went by the nickname Caillou, was always the 1st to volunteer, awesome medic & a pretty good cook. Every one in ROTO 9 was his friend.... Your Canadian fallen sure had a lot of friends. Didn't know them personally but from everyone that's spoken about them they sure sounded like special people. God bless Canada & all her citizens this morning.

Let us always remember and honour these fine Canadian heroes who serve the cause of freedom. Holding all who love them close in my heart.

Rest in peace, Master Cpl. Kristal Giesebrecht and Pte. Andrew Miller.
Posted by The Brat at 1:11 AM