Today, one of those 'milkooks' has a message for MY, and it is your must read of today.

"Per Mike Yon on Facebook: If we are going to make a success out of this war, must start squeezing out and choking off the irresponsible "sources." People who care will start writing letters to editors/producers who link to websites such as Blackfive and Mudville Gazette. Must start telling mainstream sources that when they link to milkooks, we stop paying attention. Please leave comments at mainstream message boards encouraging people to ignore milkooks.

[He goes on with more quotes from one of MY recent screeds, which I won't bore you with, and then responds]

I will respond to that here, as it is my web page and even though the Code Monkey is driving the bus, I can still moon people from the windows.

My well reasoned and thought out response: Mikey, Milbloggers made you as popular as you are. If it weren't for sites like Blackfive and Mudville Gazette, you would be the saddest panda in Iraq right now, living hand to mouth on the mercies of people who had not (yet) had enough of your silly shit and tantrums to stop putting up with you. You may have been taking good pictures, but nobody would have noticed, were it not for us "milkooks."

You go back to taking pictures in Afghanistan, Iraq, or Thailand, or wherever suits you. Since photography is your medium of choice, and you refuse to consider anyone who hasn't "been there" as a valid information source, I'll post my street cred right here: 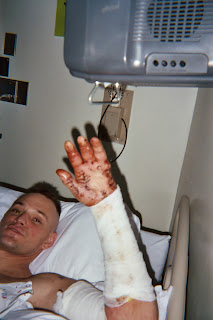 This is my (most of) hand. Although swollen, it's smaller than it was the day before. I left the rest of it in a canal near Baqubah, Iraq. This is only one of the horrors of war....

There is more, MUCH more, and Chuck ends with this:

...Your effect on anything is negligible. (Because even when you do violate OPSEC, nothing happens.) If you were actually saying anything worthwhile, the enemy would be reading your site, like they do mine.

Oh by the way, do you know who is 100% involved in soldiers angels and Valour-IT? Not just involved, but actively supports and raises money for it? That's right mikey, Blackfive and Mudville. You beg others to smear them--what do YOU actually DO for soldiers? What do YOU provide for them?

Now who is the irresponsible source, mikey?

I could add my 2 cents' worth here, but as usual, our military says it all so much more intelligently than I ever could. Any ongoing observer of our current war on terror knows who has the street cred, knows who is the responsible source. Our warriors are walking the walk, while some are content to have foot massages in Thailand. Our current military is spending their blood, while *some* are spending their donors' dollars, as they talk talk talk about how our military *should* be conducting this war. ( I wonder if these willing donors know that a lot of their $$ go to paying MY's lawyers, as he fight his own battles? Just sayin'...) Not to worry, though, as General Petraeus is now getting 'expert' advice from Thailand 'sources' and will win the war for us all - milkooks included? - as long as they pay attention to HIS 'expert' opinions.

As Chuck says: 'crickets'.. Go NOW, and read the rest of Chuck's column here.
Posted by The Brat at 6:00 AM