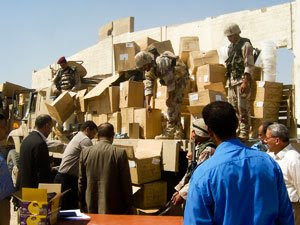 
FOB KALSU — Members of the Iraqi security forces delivered humanitarian aid supplies to an Iraqi displaced persons camp south of Najaf, with the help of Coalition forces and the Najaf mayor, Sept. 23.

Iraqi Soldiers belonging to the 3rd Battalion, 30th Brigade delivered the supplies from the newly-opened Najaf InternationalAirport with the help of the Najaf Provincial Reconstruction Team and the 30th Military Transition Team.

“Lt. Col. Salah [commander of the 3/30th Iraqi Army Bde.] did an outstanding job not only at distributing the items, but moving them from the airport to the camp and providing security along the route and at the camp,” said Maj. Anthony Campbell, 30th Iraqi Army Military Transition Team chief. “It illustrated the ability of the Iraqi Air Force, Iraqi Army and Iraqi Police to work together to assist these 232 displaced families.”

Approximately 4,000 people make up the families at the camp; they received shoes, sports suits, buckets, walkers, crutches and wheelchairs. Even after the distribution, there were still enough supplies remaining to help other displaced families elsewhere.

“The last two days’ operation to bring humanitarian aid to the nearby Iraqi displaced persons camp was a huge success,” said Campbell, of Colorado Springs, Colo.

The supplies were donated by a religious nonprofit organization in the U.S.

“The department PRT leader [Fred Fronteneau] did an incredible amount of work to get these supplies here,” added Campbell...(source)