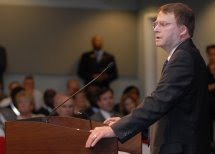 Every week, I introduce readers to extraordinary men and women who face incredible circumstances daily as part of what they call "just doing my job." In a time of war, these men and women in military show us what Hero really means - every single day.

Today, on the heels of one of the darkest days in America's history, I am truly humbled to share one of those shining bright lights, who continues to serve America, having survived the 9/11 Pentagon horrors. Yes, this read will take more than a few minutes of your time. But this hero has given way more than that of his life to service.

Lt. Col. Birdwell laid burning and bleeding on the second floor at the intersection of the 4th corridor and the E Ring, only yards from where the nose of the plane penetrated the walls. More than 60 percent of his body was blistered, his lungs were seared and he couldn't stand.

Lt. Col. Birdwell said he made his peace with God, and gave up the fight for survival.

But he didn't die.

Not then, nor hours later when he thought he might in the emergency room. Not six days later when Lt. Col. Birdwell said his final goodbyes to his 12-year-old son because chances of his survival were not even one percent.

Now recovered, retired and living in Texas, Lt. Col. Birdwell returned yesterday to the Pentagon to tell his story of survival, hope and spiritual growth.

"This is the place that the Lord spared my life," he said, when asked about how it felt to return.

"We're here to remember those that were lost and those who are serving because of those lost. So it's a great day to be back in the building," Lt. Col. Birdwell said.

Speaking to a standing-room-only crowd in the Pentagon auditorium yesterday, Lt. Col. Birdwell good-naturedly made light of the extent of his injuries that day.

While lying on the floor after the explosion, waiting to die, "Instead of hearing 'Well done, thou good and faithful servant," all I got was just more well done," he joked.

But the humor was no cover for the emotion in his voice when he earlier described lying in the darkness and screaming to Jesus, saying "I'm coming to see you."

Lt. Col. Birdwell said the blast was not like those pictured in Hollywood movies, in which characters are able to see a ball of flame coming toward them and make a conscious decision to evade its blast.

"There was just that nanosecond between hearing the sound and then the concussion, the blast, the fire," Lt. Col. Birdwell said. "I was tossed around like rag doll. The next thing I know is I'm trying to get up. It's black except for the ambient light of fires. I'm on fire. I got to my knees once."

After the blast, unable to stand and unsure of which direction in the darkness to take, Lt. Col. Birdwell said he collapsed to the floor and waited for "that feeling of the soul departing the body."

Instead, Lt. Col. Birdwell said he started feeling cold water dripping on his face. It was coming from the sprinkler system and extinguished the fire on his body.

Minutes later Lt. Col. Birdwell was able to open his eyes and he saw the reflection of some lights down the 4th corridor. Leaning against the wall for balance, he staggered a few yards toward the light.

Fires were burning and debris was scattered everywhere. Smoke was pouring down the hallway. Lt. Col. Birdwell's access badge and name tag were melted, he was covered in blood, and his clothes were literally burned from his back.

"I didn't know what was ahead of me but I knew that I needed to get moving,' he said.

At the C Ring door, he saw some friends.

"In that moment of relief that there were people there I just ... collapsed in front of them," Lt. Col. Birdwell said.

The four carried him to what had become a hasty triage area and an Air Force doctor gave him a shot of morphine and an IV. Both were given in his feet, because his feet weren't burned.

From there, Lt. Col. Birdwell was taken by golf-cart out of the Pentagon, to an SUV, and was rusted to Georgetown University Hospital. He was later flown, once airspace was no longer restricted, to Washington Hospital Center.

He spent the next 92 days there undergoing excruciating treatments, physical therapy and surgeries. In all Lt. Col. Birdwell has had 39 surgeries ranging from those that were lifesaving, to reconstruction for his face and ears.

Lt. Col. Birdwell said there is no way to describe the pain that a burn victim goes through during recovery.

"You're like a cracker. Everything's crisp. Nothing wants to bend," he said. "There is no medication that makes you comfortable. There is medication that steps you back from the edge of the Grand Canyon, that makes it quasi-tolerable, but much of what has to be done to you is pretty painful."

"With that (tracheotomy) in your throat there's no air going over your vocal cords. The Lord's the only one that can hear you screaming in your mind," Lt. Col. Birdwell said.

Of the nine that were sent to the burn unit that day, only two were expected to live. Eight survived, he said.

Lt. Col. Birdwell joked about seeing one of his fellow burn victims for the first time in the hospital.

"I remember the first day I saw John [Yates] in physical therapy and I looked at him and said what in the 'blank' happened to him. And then John looked at me and said the same thing," Lt. Col. Birdwell said.

Remarkably, Lt. Col. Birdwell returned to work the following March, although he only worked a few hours a day, two days a week. By his own account, he didn't contribute much to the office, but it was the principle behind his going to work that made him make the trip.

Just walking in and out of the building daily was exhausting, he said, because of permanent lung damage caused by the smoke and the jet fuel vapors.

"The first day I came in ... I had to sit on the bench for 10 minutes because I was huffing and puffing," he said.

But it was the memories of his two coworkers who died in the attack that kept him persistent, Lt. Col. Birdwell said.

"I wanted to be back in the building. I wanted to have that sense of purpose and mission of getting better, being part of the team. Two of my coworkers were never going to come back in. and by the lord's grace I was coming back in," Lt. Col. Birdwell said.

One day, during his early days of painful physical therapy, a pastor told him that "God never wastes our pain." At the time, the words were disregarded because Lt. Col. Birdwell's focus was on the pain and getting through the therapy.

But later, in 2002, a young man was badly burned and the Washington Hospital Center burn unit called Lt. Col. Birdwell asking if he would visit to encourage the patient.

That was when the pastor's words rang true for Lt. Col. Birdwell, and his painful experiences began shaping the direction for the rest of his life.

The former Field Artillery officer eventually got his strength back, adding more days and longer hours and then back to his regular to his schedule. But, as his retirement approached, the couple struggled with the decision to stay in, or retire from the Army. Physical disabilities would keep Lt. Col. Birdwell from being promoted, and he wasn't sure he wanted to serve from behind a desk.

He retired July 1, 2004, and, with his wife, Mel, began Face the Fire Ministries which is a nonprofit organization that serves critical burn survivors and wounded servicemembers.

"An 80-ton, 757 came through at 530 miles an hour with 3,000 pounds of jet fuel and I'm still here and the plane isn't," Lt. Col. Birdwell said. "You don't' survive that because the Army made you tough. You survive it because the Lord's got something else in mind for you."

A self-described "crispy, old guy," Lt. Col. Birdwell said he now enjoys visiting wounded servicemembers. On his trip from Dallas to Washington for the ceremony, he stopped a servicemember in the airport to shake his hand.

"To go see young men and women who have willingly said, 'Send me,' is a great opportunity to say 'Thank you,'" he said.

Even so, the Family has a greater appreciation for life, he said.

"We always understand what's most important because we've had a very graphic reminder of how precious life is," Lt. Col. Birdwell said.

This has started a very intentional tradition for Lt. Col. Birdwell, his wife and son. One that in six years, they have protected. One that, before Sept. 11, 2001, was not given much thought.

"When we are going to be apart, we always make sure we very clearly say goodbye. That way there is always that last remembered moment," he said.

I found this story here, and there is so much more all over the internet about Lt. Col. Birdwell. Go here, (for the family story), and here, (page 4):

Army LTC Brian Birdwell suffered burns over 60 percent of his body as a result of being close to the impact point when the plane hit the Pentagon on Sept. 11th, 2001. He then began a painful recovery which included more than 30 surgeries. During the healing process, LTC Birdwell and his wife were inspired to try to provide comfort and support to burn patients at hospitals nation-wide through “Face the Fire,” a ministry the Birdwells founded together. He recently visited the amputee-care center and burn unit at Brooke Army Medical Center, Ft Sam Houston, TX. During that visit, he donated $5,000 each to the Fisher House Foundation and to Fort Sam Houston Child and Youth Services. Fisher House provides “a home away from home” for families tending to loved ones at medical facilities. The donation to CYS will be used to create a child care fund for families staying at the Fisher Houses to enable families to use the Child Development Center for hourly care free of charge when the need arises. Birdwell is now retired and works in the same office where he worked at the time of the Sept. 11th attack, the Office of the Assistant Chief of Staff for Installation Management. He and his wife wrote a book, “Face the Fire,” about their experiences during and after the Pentagon attack. Profits from the book go to assist burn victims and to support the Fisher House.

As I told you, to this day, Lt. Col. Birdwell (although now retired) and his wife, Mel, STILL serve their country, and nurture other wounded military brothers and sisters in arms. Check out the story of the organisation they founded, and now run: Face The Fire Ministries.

Lt Col. Birdwell has been featured in a few msm stories, and also has a site that is a must read:
Birdwell911

An amazing man, living through events that could have left a legacy of negativity in the future of this military hero. Instead, he chose to see an opportunity to continue serving, living those words the pastor gave to him:"God never wastes our pain." This 'self-described "crusty old guy" ' MORE than qualifies as my Every Day Hero.

Thank YOU, Lt. Col. Birdwell, for your service

What a wonderful story of strength through adversity. His courage to move ahead and never give in is just another example of a true hero within our wonderful world of military soldiers. There are not words enough to express the gratitude for what he and his wife are doing to help the wounded soldiers and families of our military....

Thank you for bringing this story to the forefront.