The debate: another perspective 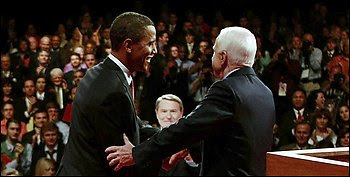 Why bother weighing in with just one more take on Friday night's Presidential Debate? By now, every conceivable angle has been covered. Predictably, both camps have claimed victories. What could be said that hasn't already been said, and said by more astute pundits than myself?
Well, there is one little thing. One little sentence that sticks out in my mind and just will not go away. One small phrase which Obama uttered that to me has more significance than everything else he stated during this contest. And here it is: "America is the greatest country in the world, but--" But. That's the word that matters, folks. That's the word that more than any other reveals the goals of this candidate. America, he goes on to explain, is not the same country it was when his Kenyan father spoke of America with those high expectations. Children around the world no longer look at America the same way. This, then, would be the sacred crusade of an Obama presidency: to restore that faded luster to our American star. To get people around the world to like us once again. To make it possible for his wife to be truly proud to be an American for the first time in her lifetime. Barack Obama sees it as his mission to make it up to the world for all of America's past transgressions. To make America more universalist.

My God. Where has this man learned his American history? From the Reverend Wrights of this world? Is this what we want? What we need right now? Is this the new America? A regretful America, ashamed of itself and of its history? A humbled America, apologizing to the world for its existence and for its success? Do we really want a more internationalist America, an America more beholden to the world's agenda than to our own? Do we really want to relinquish more of our sacred national identity?

Just ask the poor betrayed Brits how they like their new found internationalism. Their merging of cultures and their loss of their own. Ask the Brits how they feel about the EU and Brussels.

Regardless of your party affiliation, if you feel, as I do, that the United States of America owes no one any apologies, and has every right to promote its own interests and to protect those interests, without interference from any foreign powers or organizations of foreign powers, then we just cannot let this man win the presidency. We cannot give away this great nation of ours this easily. - rg (source)

Email ThisBlogThis!Share to TwitterShare to FacebookShare to Pinterest
Labels: Roger on the debate