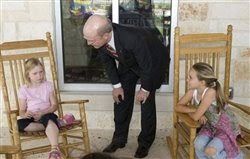 Army Secretary Pete Geren meets with Elizabeth Harris, left, and Abby Smith, children of wounded soldiers, April 29, 2009, during a visit to the Warrior Family Support Center, Fort Sam Houston, Texas, in observance of the Month of the Military Child. Geren applauded the contributions made by the children in supporting the recovery of their parents.

FORT SAM HOUSTON, Texas, April 30, 2009 – The road to recovery for a wounded soldier can be long and difficult, but with the help of Army medicine and the love of military spouses and children, that road is shorter and smoother.

For some soldiers who use the Warrior Family Support Center here, their sons and daughters have played an instrumental role in their recovery as wounded veterans.

Soldiers and their families use the center at no cost to them while they receive care at Brooke Army Medical Center here. Through peer and community support and recreational activities, the center provides a high-quality setting for the whole family as they return to normal life.

Reestablishing family responsibilities is critical to the recovery of many soldiers. At least 1.7 million American children have at least one parent serving in the military with an estimated 900,000 of those with parents who have deployed multiple times overseas.

On April 29, Army Secretary Pete Geren expressed his personal appreciation to a group of children of wounded warriors at the center.

"The Army is asking a lot of you all and I hope that we are doing everything we can to help you and your parents," Geren said.

"When I first got injured, she didn't want to look at me, and I used to have to make fun of my injuries to try to cheer her up," said Smith, recalling how he told his daughter the wounds on his leg looked like train tracks. "She had a hard time dealing with my situation at first, but now she helps me more than I can believe.