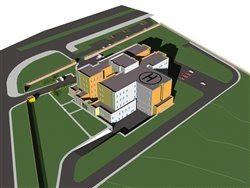 The Irbil resident engineer design team incorporated preconstruction input from the doctors into the construction plan for the $12.6 million, state-of-the-art medical facility.

“Many of our projects in the area involve end-user input, and this process has been extremely productive and a rewarding experience to me,” said Gary York, Irbil resident engineer. “This cooperative process also builds trust and a lasting relationship with the ministry from the inception phase through the handover of a project.”

The new hospital will be the area’s primary access point for treating emergency patients. There is only one existing facility, and its dilapidated condition has caused major disruptions in service and represents a threat to public health, local health officials said.

The four-story, 165-bed hospital is scheduled to open in April 2010, just 450 days from the beginning of construction. It will have nine operating rooms, a comprehensive medical laboratory, and X-ray, CT scan and MRI capabilities. The hospital’s burn unit will have the capacity to care for many of the more than 45 burn patients who are treated in Irbil hospital emergency rooms monthly.

Although it’s common for hospitals in the United States, the Irbil hospital is the first in the area to have a helicopter pad on its roof. The hospital also is equipped with its own electrical generating unit, and the water for the hospital will be supplied by an on-site well.

One factor credited with the rapid pace of construction is the use of Ytong thermo-stone blocks. Unlike the usual cinder blocks used in most construction projects in Iraq, Ytong blocks are larger, lighter and easier to cut and mold into various shapes. A powdered variation of the blocks is used as mortar.

Construction workers don’t have to deal with the backbreaking job of lugging heavy cinder blocks into the higher elevations of the site, thus cutting down on fatigue and injuries to workers, the on-site safety manager noted.

The U.S. Economic Support Fund is funding construction and all medical equipment for the facility. The current facility takes up three acres of a six-acre site, allowing room for future expansion. This project, which is being constructed by the Turkish-owned Tigris Co., is the first U.S. Army Corps of Engineers hospital project for in Irbil.