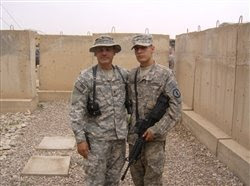 BAGHDAD, May 18, 2009 - A father and son serving together in Multinational Division Baghdad on Camp Liberty, Iraq, epitomize their family's tradition of service.

Both father and son feel strongly about their family's military history; five generations of Heredia men have served in the military since the Spanish-American War.

"Joining the military is something that I always wanted to do," he said. "Since I was a child, I have never thought about doing anything else. My father was never overbearing about my decision to join the Army; he always told me it was my decision to do whatever I wanted to do in life."

The elder Heredia was born in Bronx, N.Y., and joined the Army in 1977, as an infantryman so he could stay off the streets at a time when gangs, drugs and organized crime were at their peak. He was hanging out with the wrong crowd, he said, and could see that if he continued on that path it would lead him nowhere. He served six years in the military and received an honorable discharge in July 1983.

"I regret ever getting out of the Army," he said. "It was one of the best things I have ever done and enjoyed doing. So when terrorists attacked the Twin Towers on Sept. 11, 2001, I felt compelled to do what was right and rejoin the U.S. Army."

But it wasn't that simple; he was too old at the time to join the military. After waiting for four years, he was able to join an Army Reserve unit in Tampa, Fla., in July 2005.

The Heredias both said that being stationed at the same installation in Iraq is one of the best things that could have happened, since they live in different parts of the country back home.

"We see each other at least twice a week and speak to each other every other day on the phone," the father said. When they have time, they enjoy having lunch together.

Also, Allen Heredia said, he doesn't worry about his son much now, because he is able to see him every week.

"I am proud of both of my kids; they are the pride of my life," said the elder Heredia, whose daughter also serves in the Army. "The only thing I would do to change this whole situation would be that I would have loved to work with my son and go on missions together."

Thank you both for your service.