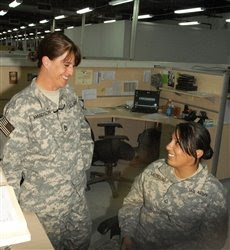 CONTINGENCY OPERATING BASE BASRA, Iraq, May 7, 2009 – While deployed mothers will miss out on their traditional Mother’s Day celebrations May 10, some are making the best of the situation.

“This is not forever. This is a temporary stomping ground in your overall life,” said Army Sgt. 1st Class Angela Amundson, actions and awards noncommissioned officer in charge for 34th Infantry Brigade.

The Hastings, Minn., native is spending a year away from her 14-year-old stepson, Alex, and her 7-year-old daughter, BriAnna. But for her, Mother’s Day is about more than just her children. Every year, the Amundsons have a tradition for Mother’s Day.

“What I like to do is get all the mothers together and we all go to brunch on Mother’s Day with all our children and my husband’s sister, my sister – anybody we can get to go,” she said. The family started this tradition because they were going to multiple houses for a short time, Amundson explained.

“We’re all family, whether we’re blood or not,” she said. “So I said, ‘Let’s all get together.’ That way, you don’t have to go five different places, kind of like Thanksgiving or Christmas. It’s much nicer and easier to have everyone together.”

This Mother’s Day, while Amundson’s family is having brunch, the deployed soldier will acknowledge other mothers here.

“I want to make sure to recognize other mothers this Mother’s Day,” she said. “Being a mother isn’t about yourself – it’s about everybody else.”...

Thank you for your service, Sgt Amundson.

Have a wonderful Mother's Day, dahling!!