"Our country is diminished with Eric's passing" 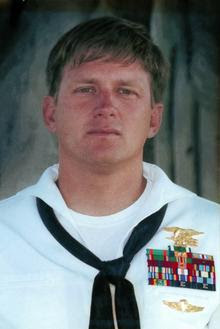 SAN DIEGO (NNS) -- A Naval special warfare operator assigned to SEAL Delivery Vehicle (SDV) Team One at Pearl City, Hawaii died May 7 while conducting training in the waters off of Bremerton, Wash.

An investigation into the incident has been initiated.

During an SDV training dive in the very early morning hours Thursday, Shellenberger encountered difficulties in the water and signaled for an emergency ascent. Upon reaching the surface, he was non-responsive and rescue breathing was administered.

"This is a heart-wrenching loss for us and, most assuredly, the Shellenberger family," said Adm. Edward Winters III, commander, Naval Special Warfare Command. "The strength of our small, close-knit community is in our exceptional personnel. Eric was one such individual. He bravely and willingly accepted the risks inherent in training for and carrying out special operations mission. I extend my deepest sympathy to Eric's family and friends. Please know he will not be forgotten."

Shellenberger enlisted in the Navy Nov. 30, 1999, after completing more than eight years in the U.S. Marine Corps. He transferred from the Transient Personnel Unit, Great Lakes, Ill., in February 2000 to the Naval Air Technical Training Command, Pensacola, Fla., where he served for two months until he reported to Basic Underwater Demolition/SEAL training at Naval Special Warfare Center, Coronado, Calif., in April 2000. He graduated with BUD/S Class 232 on Jan. 26, 2001 and subsequently reported to Advanced Training Command in Coronado. Shellenberger earned his Trident following graduation from SEAL Qualification Training June 29, 2001.

Shellenberger was assigned to SEAL Team One in Coronado and served there from July 2001 to December 2004.

He subsequently served at Naval Special Warfare Group Advanced Training Det. in Virginia Beach, Va., from January to May 2005 and then attended SDV training in Panama City, Fla., from May to July 2005.

Shellenberger reported to SEAL Delivery Team One in Pearl City, Hawaii, in September 2005.

"God bless Eric and his family. He was a true hero, a great American, a great SEAL. Having him under my command twice as a platoon commander and task unit commander was truly a blessing," said Lt. Cmdr. Robert Byford, executive officer of SDVT-1. "Our country is diminished with Eric's passing, and I have lost a true, life-long friend. He will be sorely missed by all his teammates and anyone whose life he touched."

Shellenberger completed more than seven combat deployments to Iraq and Afghanistan, including deployments as an Assault Team Leader in Ramadi during the Sunni Awakening in 2006-2007, as well as a combat deployment as a Force Reconnaissance Marine to Somalia before transferring to the Navy.

Shellenberger is survived by his mother, stepfather, father, two brothers, grandmother, fiancé and extended family. They wrote,"Eric will be dearly missed. We always considered him to be a true hero, and he will be in our hearts forever. We love him will and cherish his memory. He will never be forgotten." [source: US Navy]

Prayers for all who love this hero. May he rest in peace.
Posted by The Brat at 8:45 PM

My deepest prayers are with Eric's family....he was a true hero....To his parents and fiancé...I know god is watching over such an extraordinary individual. To Marc and Jared...I am sorry. My heart hurts for everyone who loved Eric. You are all in my prayers.

My prayers being sent as well...

May God hold all his family in his embrace.

We are so sorry and shocked. We were really impressed by Eric and proud to have had the opportunity to meet him. He was a class guy and probably the only true hero we ever met.
Our prayers are with Eric's family and Krissy.
Jo Ann & Mark Jamieson

This is truly heartbreaking. I am so sorry. SEALs are the best of the best.

As I read Eric's accomplishments, I am so grateful to him for what he has done for my family and our country. As impressive as his service record is, I know he is even more than that to his family and friends. My heart goes out to all of them, and my appreciation goes out to him. I keep you all in my thoughts and prayers.

RIP Shelly. Your teammates love you, will miss you, and will never forget you. Deepest possible condolences and prayers to the entire Shellenberger clan - your wonderful son touched the lives of many young warriors every day. Our country certainly is diminished without him.

I am so deeply sorry to hear this. His family and loved ones are in my prayers.

Eric will be missed, your family is in my prayers.

I knew Eric in Guam.... I had thought of him time to time and we kept in touch through email.. I hadnt heard from him in a while, then my email changed and Today I was going to look him up...then I found this.. I am soo heart broken for his family, that is all that he talked about! We knew each other his whole Guam deployment He was a great friend and more! I will miss him dearly, my prayers to his mom and Dad and brothers & family!