Ribbon-cutting ceremonies celebrating the opening of the new schools were held at the Bin Beriz and Hassarok schools in Irbil and the Saraway Khwarw Secondary School in rural Sulaimaniyah.

“These schools are serving multiple villages in the area and stand as cornerstones of the residents’ commitment to education in their communities,” said Gary York, resident engineer for the Gulf Region Division’s Irbil Resident Office. “These projects are yet another successful partnership between the [local government] and the U.S. Army Corps of Engineers, and one that makes us both extremely proud.” The U.S. government’s Economic Support Fund provided funding for all three school projects.

Amenities for the Bin Beriz School include classroom space for 600 students, an administrative area, staff housing for teachers, a deep fresh-water well, a backup generator and school furnishings. The $975,000 project, constructed by the AKO Co., also included money for desks, library tables and some of the office furniture. 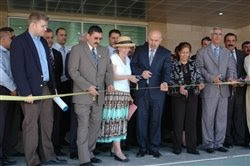