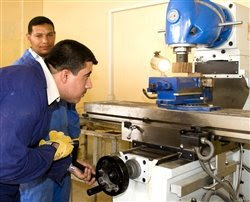 The newly renovated Iskandariyah Vocational Technical Center in Iraq’s Babil province is expected to train and house 4,000 students in a variety of occupational specialties. U.S. Army photo by Alicia Embrey

The Iskandariyah Votech and Industrial Complex, 25 miles south of Baghdad, once was the industrial jewel of north Babil province. But during April 2003, its automotive, industrial and munitions facilities were ransacked and torched by looters, leaving behind burned-out shells of what had been home to 25,000 employees.

To help to revitalize that area, Iraqi officials, the provincial reconstruction team and U.S. forces combined their efforts.

The U.S. Army Corps of Engineers oversaw the Votech’s upgrade, using Iraqi contractors. The three-phase project included renovating seven dorms, a classroom building, an auditorium and a mechanical shop. The Iraqi crew of 200 local workers finished the project three months ahead of schedule. Of those workers, 50 were recent graduates of the center.

When the Votech renovations began in 2007, the school was offering a limited curriculum for an enrollment of 30 students. This year, the center is expected to train and house 4,000 students in a variety of occupational specialties, including hair dressing, sewing, administration and other clerical work, computer and automotive maintenance, masonry, electrical work, carpentry and welding.

“The renovation project became a reality because of the partnership between city and provincial government leaders, coalition forces, the Babil PRT, the U.S. Army Corps of Engineers, and the Iraqi construction crews, along with unwavering support from the local community,” said Army Col. Jack Drolet, district commander of USACE’s Gulf Region South district. “The young men and women who come to this vocational center will learn skills, laying a foundation for future prosperity. We’re honored to be part of this effort.”..