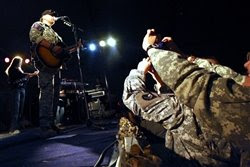 Service members crowd the stage April 27, 2009, at Bagram Air Field, to catch a photo of Toby Keith during his concert in Afghanistan. This was Keith’s seventh tour with the United Service Organizations. U.S. Army photo by Capt. Michael Greenberger

BAGRAM AIR FIELD, Afghanistan, April 28, 2009 – Country singer and troop supporter Toby Keith finished up a 15-show tour in Afghanistan yesterday as he drew near the end of his seventh tour with the United Service Organizations.
Keith spent five days criss-crossing the war-torn country visiting bases large and small in a whirlwind of handshakes, autographs, photo-ops and of course – country music shows.

Whether it’s hundreds of Marines at Camp Bastion or a crowd of thousands at Kandahar Air Field, countless hours of preparation and manpower go into making each show special.

“It’s a three-pronged attack,” said Rachel Tischler, USO vice president of entertainment operations. “The crews get to work setting everything up for the larger shows as most of the band goes to see people at the larger bases. While they are doing that, [Toby] and a few others visit the more remote locations.”

Keith’s tour visited Forward Operating Bases Tillman and Boris, near the Pakistan border, in addition to the larger bases, like FOBs Sharana and Salerno.

“It was important to Toby and the crew to visit as many of the smaller, remote locations as possible,” said Tischler. “Never mind getting entertainers – some of them don’t have running water!”

Keith, was taught early on to respect the military and those who serve in it.

“My father was a soldier. He taught his kids to respect veterans,” said Keith. “It’s that respect and the thank-you that we have a military that’s in place and ready to defend our nation; our freedom.” ...