Military Spouse of the Year 2009 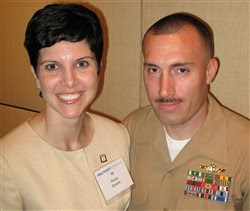 Tanya Queiro, the 2009 Military Spouse of the Year, stands with her husband, Marine Gunnery Sgt. Jose Queiro, following an awards ceremony in Washington, D.C., May 7, 2009. Queiro, who achieved the rank of staff sergeant during her own 13 years in the Marine Corps, also was recognized as the Marines’ top military spouse for 2009. Defense Department photo by Gerry J. Gilmore

WASHINGTON, May 7, 2009 – Tanya Queiro, a former Marine Corps noncommissioned officer, was named the 2009 Military Spouse of the Year at a ceremony held here today.

Queiro, who achieved the rank of staff sergeant during her 13 years in the Marine Corps, also was recognized as the Marines’ top military spouse for 2009.

“Military spouses know that military service is not a job; it is a lifestyle,” Queiro said upon accepting her two crystal-glass award trophies.

Living the military lifestyle, Queiro pointed out, provides “endless opportunities” for adventure and learning for many military spouses.

Military spouses, she said, take care of the children and perform other important tasks as part of maintaining the family home front, while their husbands and wives are away on military deployments.

Queiro’s husband, Marine Gunnery Sgt. Jose Queiro, is stationed at Camp Lejeune, N.C. They are raising three children: two sons, Jose, 12, and Marcus, 10, and daughter Adrianna, 8. Queiro said she met her future husband while she was in the Marines.

After having spent two tours each in Afghanistan and Iraq, Gunnery Sgt. Queiro said he’s thankful for his wife’s support while he’s away performing special operations missions.

“I could walk out of that door at anytime, head to Afghanistan or Iraq, and know that everything back at home will be alright when I get back,” he said. “I don’t have to worry about any issues in the rear. I know my wife is handling everything.

“That means a lot. I can concentrate on the mission, and come back home alive,” the Marine noncommissioned officer said.

Military spouses support their husbands or wives and serve the communities in which they live, Tanya Queiro said in an earlier interview. She volunteered to participate in the Marines’ Lifestyle Insight, Networking, Knowledge, and Skills (LINKS) mentorship program that provides new military spouses with knowledge about Marine Corps’ traditions, customs and courtesies and overall military culture.

“All the volunteers are spouses teaching spouses,” she said. “So, we hand down best practices; things that have worked for us, and hopefully, things that will work for them in their marriage.”

“Tanya goes out of her way to share this knowledge with other military spouses in an effort to make the difficult aspects of military life just a little easier for them,” said Jones, who serves on the MSOY selection committee.

Queiro is “a blend of toughness and compassion,” Jones continued, who “brings professionalism and commitment to everything that she does – her family, her friends, her work and volunteerism.”

Other military spouses honored as service-branch winners at the ceremony include:

“The military families are very, very much part of our national security portfolio and they have to be considered and maintained right up there at the forefront of things,” the senior White House official said. “And, to all of the military spouses today, since today is Military Spouse Appreciation Day, I want to thank you and express my deepest appreciation for everything you have done and everything you are doing and will continue to do.”

The MSOY award and ceremony are sponsored by Military Spouse Magazine and USAA, a financial services firm that serves military members and their families.

The Military Spouse of the Year awards honor people who embody the best characteristics of today’s military spouse, said Babette Maxwell, a Navy spouse and the co-founder and executive editor of Military Spouse Magazine. Military spouses, she said, have provided important and distinguished service for the nation since the Revolutionary War.

And, the Military Spouse of the Year awards, Maxwell said, are “about recognizing the challenges and sacrifices that are unique to the military community.” [ source]

Email ThisBlogThis!Share to TwitterShare to FacebookShare to Pinterest
Labels: Military Spouse of the Year 2009