Memorial Day at Arlington: Flags In 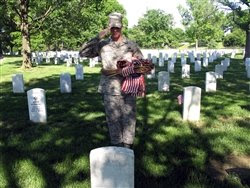 Airman Jacob Proffer, a member of the Air Force Honor Guard, pauses to salute a grave after placing a miniature flag at its base during the “Flags In” tribute at Arlington National Cemetery, May 21, 2009. “When I do this, it makes me take a lot more pride every time I put on my uniform, seeing the measure of sacrifice so many have made,” he said. DoD photo by Donna Miles

WASHINGTON, May 22, 2009 – More than 3,000 servicemembers officially kicked off the Memorial Day commemoration last evening as they placed more than 250,000 miniature flags at every grave at Arlington National Cemetery.

The tradition, known as “Flags In,” dates back to 1948, when soldiers of 3rd U.S. Infantry Regiment, known as “The Old Guard,” began the annual Memorial Day tribute.

This year marked the sixth year company-size elements of sailors, airmen, Marines and Coast Guardsmen joined about 3,000 soldiers in placing a U.S. flag at the base of the gravestone and columbarium niche of every servicemember buried or inurned at Arlington.

Yesterday afternoon, the troops fanned out across the cemetery’s hills and valleys, carrying rucksacks bulging with bundles of flags. They approached each headstone, centering a miniature flag exactly one boot length from the base before sinking it into the ground.

“I can’t say how lucky I feel to have the opportunity to do this,” said Army Sgt. Daniel Sonntag, a member of the Old Guard’s Headquarters and Headquarters Company, 4th Battalion.

“Not many people get to do something like this,” said Sonntag, who deployed to Iraq with the 1st Infantry Division in September 2006 and has friends buried at Arlington. “This is something small we can do to honor those who have fallen before us. … It’s a way to recognize how important each one of these men and women here really was.”

Airman 1st Class Rion Ehrman, a member of the Air Force Honor Guard who routinely participates in funeral details at the cemetery, said he felt humbled to participate in the Flags In tribute to honor the fallen. “It’s a real honor to be putting the flag they died for right in front of them, especially on Memorial Day,” he said.

“It’s just beautiful,” Ehrman said as he paused to look out over the sea of flags fluttering in the wind. “I just love Arlington, and I think it’s the best job in the world, to be here every day.”

Arms laden with flags, Navy Seaman Christopher Crespo knelt down at one gravestone after another, eyeing the flags to ensure they were properly aligned. “We’re honoring the people who have served before us,” he said. “What we are doing symbolizes that we haven’t forgotten them.”

At the same time, he said, it will send that message to all who will visit the cemetery during the Memorial Day weekend. “Everyone who sees this will know that we have not forgotten, and that we still care,” he said.

Marine Corps Gunnery Sgt. Carson Zumalt turned the Flags In tribute into a family affair, with his wife, Candice, sons, Aiden and Connor, and sister, Amber Lane, joining in the effort.

Zumalt called participating in Flags In “a powerful reminder of the sacrifices that have been made for our freedoms” and the ultimate cost that many, including some of his brothers in arms, have paid. “We all know what we’re up against when we join the service and deploy,” he said. “This is a way to tell them, ‘Thank you for your service.’”

Airman Jacob Proffer, a member of the Air Force Honor Guard, paused to salute a grave after placing a miniature flag at its base. “When I do this, it makes me take a lot more pride every time I put on my uniform, seeing the measure of sacrifice so many have made,” he said. “I hope that when people come here and see this, they will understand the price of our freedoms.”

Nowhere at Arlington did that sacrifice feel quite as poignant as in Section 60, lined by the graves of many casualties of the wars in Iraq and Afghanistan.

Email ThisBlogThis!Share to TwitterShare to FacebookShare to Pinterest
Labels: Memorial Day at Arlington: Flags In