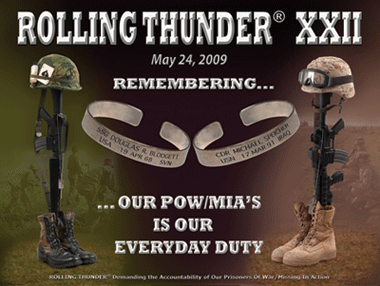 NESHANIK STATION, N.J., May 18, 2009 – Mike Corrado, the Marine recording artist whose 2005 hit song “On My Watch Tonight” was featured on ABC’s “Extreme Makeover Home Edition” and has become an anthem for servicemembers worldwide, is one of the headliners in Rolling Thunder’s “Saluting the Troops” program in Washington, D.C., May 23.

Vietnam Memorial Founder and veterans’ activist Jan Scruggs also will be a featured speaker at the event, which will be held from noon to 5 p.m. at the reflecting pool at the base of the Lincoln Memorial.

The keynote speaker for this year’s program is Patrick Campbell, the chief legislative counsel for Iraq and Afghanistan Veterans of America. Campbell also is a sergeant and combat medic in the District of Columbia National Guard who served in Iraq with the 256th Infantry Brigade. Campbell’s blog has been noted by the MSNBC television network, and he has made many network media appearances. He also has testified before the Senate and House veterans affairs committees on mental health, education benefits and appropriation issues.

Incorporated in 1995, Rolling Thunder is a nonprofit organization with more than 90 chartered chapters throughout the United States. Officials said 40 to 45 percent of the men and women in the group are nonveterans, with the balance being veterans from all wars and peacetime. Although many of its members ride motorcycles, they added, owning or riding a motorcycle is not a condition for membership; all that’s necessary is having the time and willingness to be an advocate for troops, veterans, and the nation’s prisoners of war and servicemembers missing in action.

*And, go read Born in the USA -another great article about Rolling Thunder - here. H/T to BlackFive. *