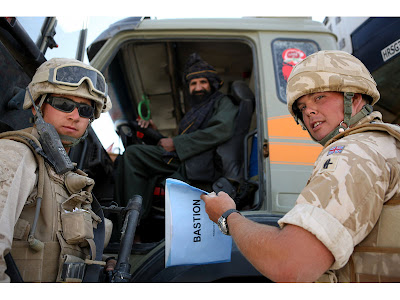 US Marines honour UK soldier for work at Camp Bastion

A British soldier has been honoured by the United States Marine Corps for his work in sorting, searching and clearing Camp Bastion's entry control point of nearly 200 vehicles per day.

As Entry Control Point Commander at the UK's biggest base in Helmand province, Lance Corporal Matthew Farmer is responsible for all vehicles which pass through the joint Camp Bastion and new US Marine Corps Camp Leatherneck complex every day.

More than 10,000 troops from the US Marine Corps have been moving into Helmand province over the last few months establishing Camp Leatherneck as their headquarters.

Lance Corporal Matthew Farmer has been presented with the US Marine Corps Meritorious Mast after he showed his endurance and volunteerism by taking on the arduous task.

He was singled out by the Americans as the perfect example of displaying superior initiative, exceptional performance and a strong work ethic during his deployment in Afghanistan.

"We felt it was appropriate that Lance Corporal Farmer was recognised for his performance in facilitating the through-put of all our supplies and critical vehicles into Camp Bastion and Leatherneck in order to support the US Marine Corps in getting mission-ready."

LCpl Farmer, who has served in the Army for seven years and is on his fourth operational tour, said:

"I'm honoured to receive this award from Lieutenant Colonel Naler. I was shocked when he presented it to me, it was a complete surprise, but of course I'm very pleased."

"The US Marine Corps is building Camp Leatherneck at the moment to facilitate the surge of over 10,000 Marines that are coming into Helmand province. That means bringing in a lot of trucks and vehicles to build and maintain a very big camp. We have to search them all.

"It's great working with the US Marines, we all get along very well with them. They have a good sense of humour."

The Meritorious Mast award is derived from the pre-twentieth century US Navy tradition of gathering the crew around the main mast of the ship to deliver punishment and rewards.

In the modern US Marine Corps it is a written recognition of work exceptionally well performed and is of greater value than a Letter of Appreciation or a Certificate of Commendation.

"If you are awarded a Meritorious Mast in the US Marine Corps it significantly adds to your chances of promotion. They don't give these out lightly. It is an impressive achievement for Lance Corporal Farmer."

LCpl Farmer's citation added that his 'exceptional attention to detail and strong work ethic significantly contributed to the safe and effective processing of thousands of vehicles', concluding that his 'efforts and faithful service reflect great credit upon [himself] and are in keeping with the highest traditions of the Armed Forces of the United Kingdom'.[source UK MoD where you'll find all sorts of great news about MY Brits.]

Thank YOU for your service Lance Corporal Farmer.