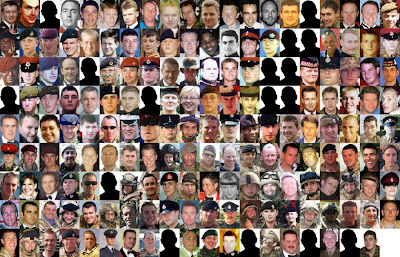 (snapshot profiles of the fallen here) 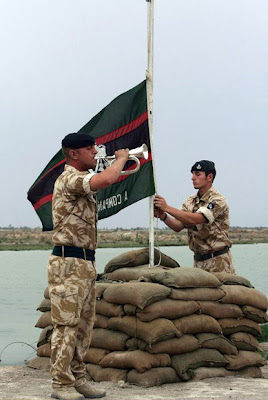 A ceremony has been held in Basra to mark the official end of the six-year British military mission in Iraq.

UK combat operations ended as 20th Armoured Brigade took part in a flag-lowering ceremony with a US brigade.

Gordon Brown said the operation in Iraq had been a "success story" because of UK troops' efforts.

"We owe much of that to the efforts of British troops. Our mission has not always been an easy one, many have said that we would fail.

"Britain can be proud of our legacy that we leave there."

Mr Maliki said: "There are people in Iraq who want the government to fail but our army and armed forces are ready to face these challenges."

In Britain's past, foreign occupations and outposts of empire have ended with a bugle and a simple ceremony.

It was that way on Thursday in the searing heat of Basra.

The lowering of the regimental flag of the 20th Armoured Brigade signalled an end to all British combat operations.

The remaining task for Britain's forces is to pack and return home.

This most controversial of conflicts ended in a corner of the Basra airbase surrounded by concrete blast-proof walls.

"There are still people out there who would like to kill us," Col Richard Stanford had reminded us.

As the temperature soared into the upper 40s, a British flag party marched forward and lowered and folded the flag. Command passed to the Americans.

Their commander praised the British and said: 'We are brothers in arms."

Then Brig Tom Beckett shook hands with Col Henry Kievenaar and, with that handshake, the British mission was over. (here)

I think when the history is written of this campaign, they will say of the British military: 'We did a superb job'

I am sure there will be much debate and mudslinging for years to come over our mission in Iraq. For me, the over-riding thought is that our British troops have done an amazing job, and should hold their heads up proudly.

We WILL remember them. With gratitude and pride. Always.

Email ThisBlogThis!Share to TwitterShare to FacebookShare to Pinterest
Labels: British troops out of Basra