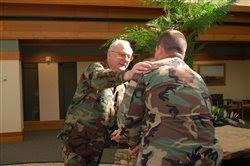 DOVER AIR FORCE BASE, Del., April 24, 2009 – The night sky looked calm and tranquil from a gently soaring aircraft, miles above the Eastern Seaboard towns below. However, there was nothing tranquil or calm in the hearts of one family on board, traveling to Dover Air Force Base to witness the dignified transfer of their son’s remains.

Their son, their Marine, their hero had paid the ultimate sacrifice in the mountains of Afghanistan only the day before. The staff at the Air Force Mortuary Affairs Operations Center would carefully prepare his remains for transfer to his final resting place.

As the family arrived at the Dover flightline, the mother’s tear chalice overflowed and her emotions began to stream from her eyes. Her husband quickly comforted her with his embrace as a Port Mortuary chaplain swiftly made his way over to console the grieving couple.

Later that night, an aircraft landed at Dover and an advance team boarded the jet to inspect and pre-position the transfer case. An honor guard of Marines reverently transported the fallen Marine from the aircraft to a specialized transfer vehicle waiting nearby. Among the few airmen and Marines respectfully performing their duties on the aircraft was a familiar face – another Port Mortuary chaplain, the counterpart of the chaplain who comforted the parents earlier that evening.

The Marine’s remains are meticulously prepared for their escorted delivery and final interment in a family plot in his hometown. Once the remains are prepared, a fellow Marine arrives at Dover to escort his comrade on the journey home. Before departing on this solemn mission, the escort receives a briefing from his Marine liaison team with Port Mortuary chaplains present.

The Port Mortuary chaplain staff consists of Air Force Chaplains (retired Lt. Col.) David Sparks, (Lt. Col.) George Ortiz-Guzman, (Maj.) Klavens Noel, and Master Sgt. Timothy Polling, a chaplain’s assistant. Throughout the dignified transfer process, they provide humble counsel to the family, Port Mortuary staff and escorts, and pray over the remains of the fallen hero. This process has been repeated thousands of times over the past several years, as the nation’s fallen continue to make their way back home through the Port Mortuary at Dover.

“As a chaplain, comforting grieving families and watching over the remains of those heroes who keep me safe is the greatest calling I could answer,” said Ortiz-Guzman, who added that he is humbled and honored to “serve those who serve.”

Working at the Port Mortuary can be horrific and overwhelming. Constant exposure to the fallen takes a mental toll on the mortuary staff, as they know well that it could be them or their brother’s or sister’s remains waiting to go home. The chaplains work the same processing system as the rest of the staff, but must remain strong during those distraught times.

“Remaining strong and sane for the sake of the mission is a defense mechanism humans use to perform amongst all that horror,” Ortiz-Guzman said. “But we try to be as real as we can with our troops. They know when you are ‘snowballing’ them. We cry with them and laugh with them. We are part of the team and they all know it.”

Chaplains must continue to convey the rock, and that rock is beyond any chaplain – the rock is God, Ortiz-Guzman said. When a chaplain begins to have difficulty dealing with the situation and cannot show his emotions to the troops, he bounces his feelings off a fellow chaplain in private, and relies on his faith, keeps his spiritual focus and draws on the support of the 436th Airlift Wing chapel staff, he added.

Chaplains use these resources to keep themselves spiritually ready to help others.


Go read more about these special Every Day Heroes here.

Email ThisBlogThis!Share to TwitterShare to FacebookShare to Pinterest
Labels: Every Day Heroes